Screenshots of such a Knowledge Graph search result have surfaced on the Internet, taken by Google+ user Florian Kiersch - a researcher who in the past reported several unannounced features of the search engine giant.

Kiersch on his Google+ page said, "Looks like Google is testing a potential new knowledge graph feature for websearch. Appears to be early testing, so there is no promise that it will land on the live servers and it's likely that in case it will go live, it won't be within the next three months. Basically, it's an interactive event timeline based on data from Wikipedia." The post was accompanied by a hashtag of knowledge graph. 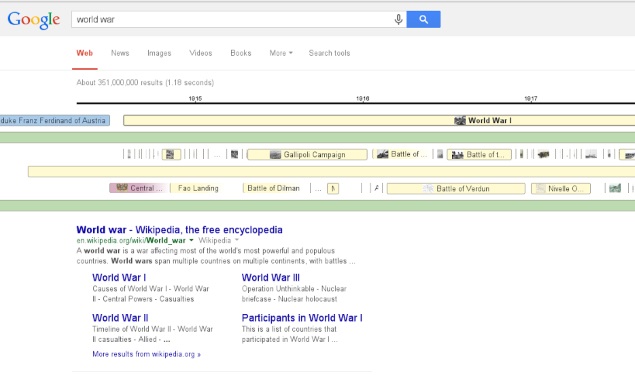 The screenshots show a searched topic (here, Google) being presented in the form of a timeline, and appears on the search result page. The Knowledge Graph search powered by Wikipedia content is said to be in its early stages, as per Kiersch. He also speculated that the feature will not be rolled out within three months.

In addition, Kiersch has also posted a video on his Google+ feed that shows the yet-to-be-announced Knowledge Graph search in action and said, "A small addition to the post about the experimental timeline feature I published yesterday. In case someone might want to see this in action instead of static images, to get a better idea of the current state."

The video shows a search for 'Google' and the results page appeared with a timeline, which appeared like an infograph of the company showing information about major personalities and the company's various acquisitions.