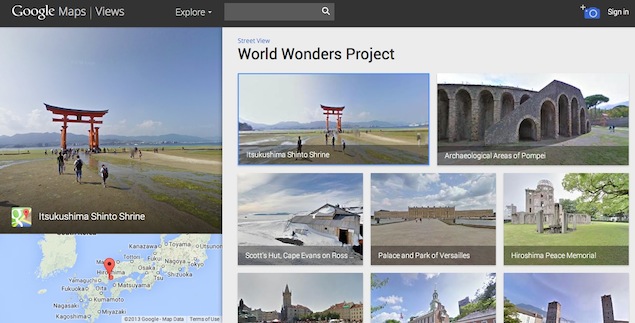 After running into trouble with local authorities in 2011, Google's Street View is back in India and this time the Internet giant has partnered with the Archaeological Survey of India (ASI) to create a 360-degree online imagery of 100 of India's most important heritage sites, including the Taj Mahal, Khajuraho Temple, and Ajanta and Ellora caves.

Google says that it will work with the ASI to bring the Street View Trekker, a wearable backpack with a camera on top, to 100 heritage sites in India for capturing imagery in remote sites or places accessible only by foot. The trekker was introduced in 2012 and features 15 lenses, each pointed in a different direction to create a 360-degree panoramic view. It is worn by an operator and is walked through pedestrian walkways or trails on foot and automatically captures images as it goes.

The 360-degree panoramic imagery would be available on Google Maps and on Google's World Wonders website after it's published, allowing people across the world to explore historical sites in India.

"In a country like India, where we have the worlds' second largest population and 5,000 years of history, rich in cultural diversity, technology can help us share the Indian experience with the rest of the world-and each other-more effectively than ever before. We're honoured to be working with the ASI to help make these important Indian heritage sites available for the world to experience online," said Rajan Anandan, Vice President and Managing Director, Google India.

It's worth pointing out that Google Street View covers everything from UNESCO world heritage sites, to places like Antartica, leading universities and even commercial establishments like Burj Khalifa.

In May 2011, Google had started collecting Street View data in India starting with the city of Bangalore through special cars fitted with camera equipment. However, after just one month, the Bangalore Police ordered Google to stop taking photos because of fears the images could be used by militants.
Comments