Two years after it started offering high-speed Internet access for free at select railway stations across India, Google has now started testing a paid model of the Google Station programme. The programme was started as a trial at Mumbai Central in January 2016 and officially launched in collaboration with state-owned telecom infrastructure provider RailTel at 53 railway stations in the country in September 2016, is planned to reach as many as 400 stations this year. While its initial model was monetised by ads, Google had indicated to Gadgets 360 last year it was open to monetising the service in different ways, and with the latest move, it has done just that.

As spotted by a Reddit user, the Google Station programme at various railway stations in Mumbai is charging Rs. 19 to offer high-speed internet access for 24 hours. The premium option includes unlimited data that can be accessed from any supported stations across the region, as seen from the screenshot provided by the Redditor. A screenshot shared by another Reddit user shows a Rs. 149 plan valid for 1 week of access. However, there is also the default free option that reduces the data speed after 30 minutes of high-speed access. Like before, the free option also comes with an ad that appears on the login page. 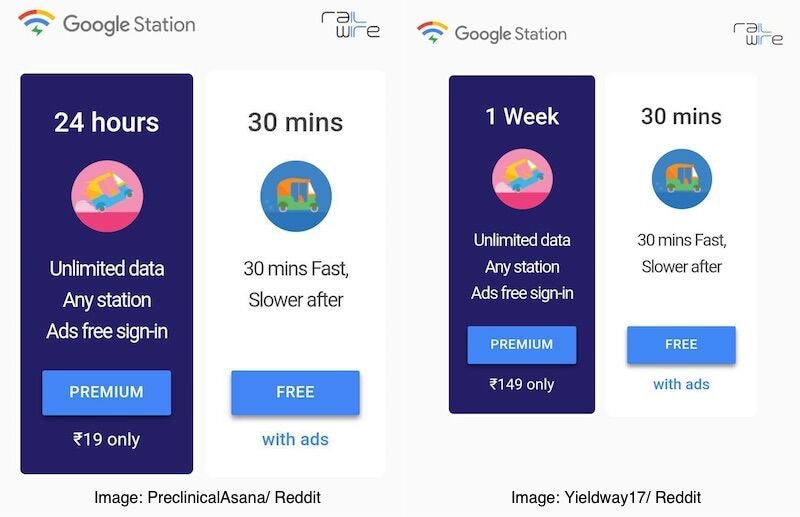 A Google spokesperson confirmed the development in a statement to Gadgets 360. “We are currently testing a paid offer, although there will always be a free option [with ads]. From the beginning, we have said that the long-term goal for RailTel Wi-Fi service was to make it self-sustainable, and a paid model is an important part of that,” the spokesperson said.

The service was piloted at Mumbai Central railway station under RailTel's RailWire initiative to offer free Wi-Fi service back in January 2016. But in September that year, Google expanded the initial tie-up with RailTel and launched Google Station as its native programme to deliver high-speed internet access to a bunch of railway stations in India. The programme attracted a large number of passengers due to its free model. At Google for India 2017 last month, Google's Next Billion Users (NBU) Vice President Caesar Sengupta highlighted that over 7.5 million users leveraged Internet access through Google Station in the country.

Google Station presently provides Internet access at 227 stations across the country, with 22 stations going live last month. With this, the project is on track to hit the milestone of 400 stations - Google had indicated for the end of this year. Google is also expanding the programme beyond railway stations and partner with new ISPs. Similarly, there are plans to bring the high-speed internet model to educational institutions and universities going forward.