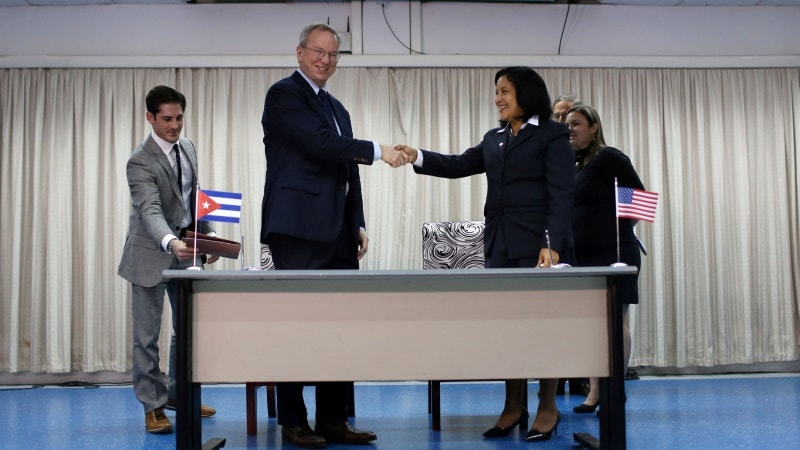 Google signed an agreement with the Cuban government on Monday granting internet users on the Communist-run island quicker access to its branded content.

In a country where public internet access is limited to slow and expensive Wi-Fi hotspots, it was not clear how the deal would actually impact service in the short term.

"This deal allows ETECSA to use our technology to reduce latency by caching some of our most popular high bandwidth content like YouTube videos at a local level," a Google statement said.

"This may improve reception of cached materials, but not for example email which depends on local bandwidth," a local telecommunications technician said, requesting anonymity for fear of losing his job.

Google and ETECSA were not immediately available for comment.

President Barack Obama has made improved internet access a central part of his efforts to normalise relations with Cuba, first announced two years ago.

However, Cuba to date has balked at allowing US companies to participate in wiring the country, citing national security concerns.

Whether because of a lack of investment or concerns about the flow of information in a Communist state that monopolizes the media, Cuba has lagged behind in internet usage. Only 5.6 percent of Cuban homes had either intranet or internet access last year, according to a UN agency.

The Google deal comes as officials in Havana and Washington are working to wrap up pending commercial accords before President Barack Obama leaves office next month.

President-elect Donald Trump has threatened to scrap detente between the Cold War foes unless Cuba makes political and other concessions.

Improved bilateral relations have been accomplished through executive orders circumventing trade embargo laws and can easily be reversed by Trump.

The Obama administration has said it hopes increased commercial links between the two countries will make it difficult for future administrations to undo the recent warming in US-Cuba relations.