According to Google this new episode related information is offered in addition to details that are already offered through its Knowledge Graph, including ratings, cast, characters and more at the right hand side of the page in the Knowledge Graph box.

In a Google+ post, the search giant informed that when users search for a TV show by entering its name in the search box, the search listing page will also offer the names of all episodes listed along with their air dates in the US. So they'll be able to see when the next episode is scheduled to be aired or when the new season of the show begins.

"Now when searching for your favourite TV shows, you can get more information about specific episodes. For example, say that you're wondering when the next season of The Walking Dead starts. Try searching for [the walking dead tv show] and you'll see all episodes listed along with their air dates. The first season kicks off with an episode called "30 Days Without An Accident" on October 13, which means you only have a few days to refresh your memory by watching last season's final episode, "Welcome to the Tombs."

Additionally, clicking on the episode title will also offer relevant results including a short summary or information related to it in the Knowledge Graph box. 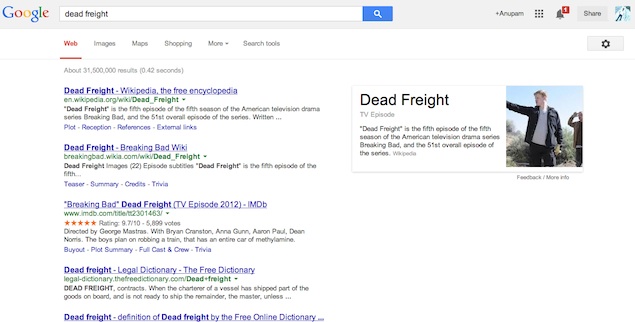 In September, Google had quietly retooled its Internet search engine algorithm to give better answers to the increasingly complex questions posed by Web surfers.

The overhaul came as part of an update called "Hummingbird" that Google gradually rolled out without disclosing the modifications. Hummingbird is primarily aimed at giving Google's search engine a better grasp at understanding concepts instead of mere words, as per the search giant.

Google also updated its Knowledge Graph, the encyclopaedia-like box that increasingly appears at the top or alongside the search results, and Google Now, a virtual assistant that tailors key information suited to each user's habits, interest and location.

The Knowledge Graph is now capable of comparing the attributes of two different things, such as olive oil and coconut oil. It will also now be possible to ask the Knowledge Graph to sort through certain types of information, such as the creative evolution of various artists.
Comments