Google Search Gets Movie Showtimes Feature in India, the US 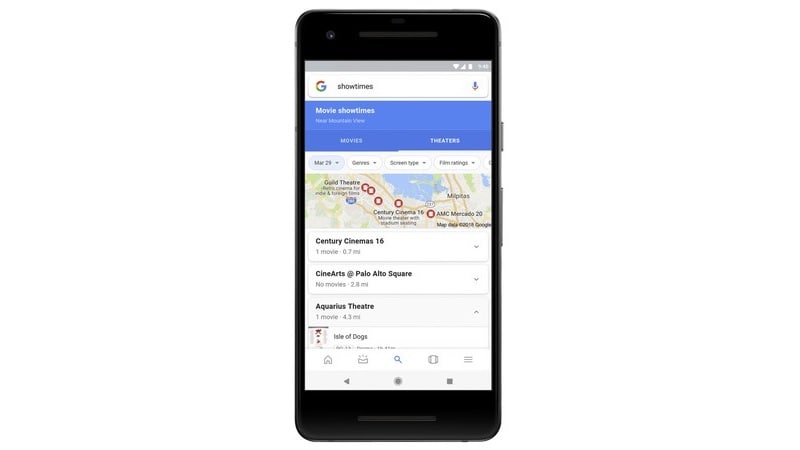 In a move that is bound to make all movie buffs happy, technology giant Google on Tuesday announced a new feature in Search that will help plan movie nights better - movie showtimes. The update is rolling out to the mobile Web interface and the Google Search app on Android in the US and India (in Hindi and English). It will also be available on mobile search in the browser, and soon, on the Google Search app for iOS.

"Going to the movies this weekend? We're now making it easier for you to make plans while you're on the go... When deciding what movie to watch, you usually consider the movie itself along with the showtimes and theatre options. With our latest update rolling out today, you can quickly compare movies by the factors you care most about-ratings, showtimes, theatre location and more-all from the same view. And just as before, you can easily buy your tickets in advance; just click on a showtime to purchase a ticket," Google said in a blog post.

While Google has supported displaying movie showtimes within Google Search results since it shut down its standalone movie site in 2016, this new update will help one narrow down their options more efficiently, TechCrunch reported.

After one performs a search for 'movies', 'showtimes', or movie times in your city, one is directed to Google's movies showtimes screen as usual, where a new set of drop-down filters is also visible the top. One can use them to filter the movies near them by a number of factors, including screen type (e.g. 3D or IMAX), the movie's genre, ratings, the critic scores, language, and preferred chains.

The card interface Google is using also shows reviews for the movie from sources like IMDb, Metacritic, and Rotten Tomatoes, apart from more information of the movie you select.