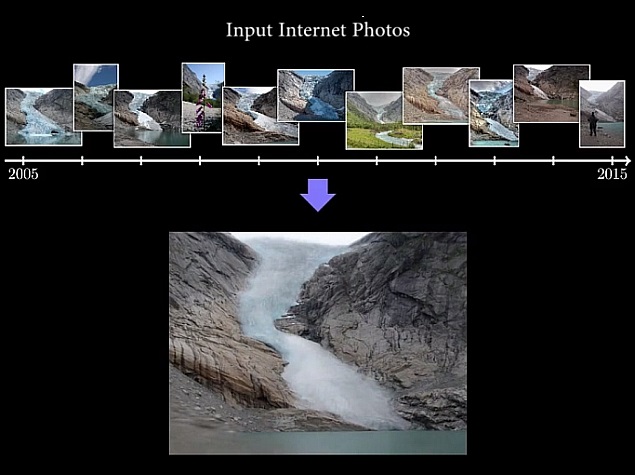 Detailing the method on a University of Washington post, the researchers said, "We introduce an approach for synthesising time-lapse videos of popular landmarks from large community photo collections. The approach is completely automated and leverages the vast quantity of photos available online[...]Our resulting time-lapses show diverse changes in the world's most popular sites, like glaciers shrinking, skyscrapers being constructed, and waterfalls changing course."

The researchers explained that they first gathered 86 million images from the Web and divided them into important landmarks and viewpoints. Next, they collated the images by date and warped each image to bring them to a matching viewpoint. Finally, the image sequence was corrected for consistency and stability to remove disparities and flicker, then finally made into a video.

The team has shared a video showcasing the slow movement of glacier, and says such time-lapse videos could prove helpful for geologists and builders. Also noted is that some of the sequences contain over 1,000 images and took almost six hours to render. The researchers on the dedicated website have duly mentioned that they will in future release the code and more results of their research soon. The team has also written a paper (pdf download) set to be published in ACM SIGGRAPH 2015.