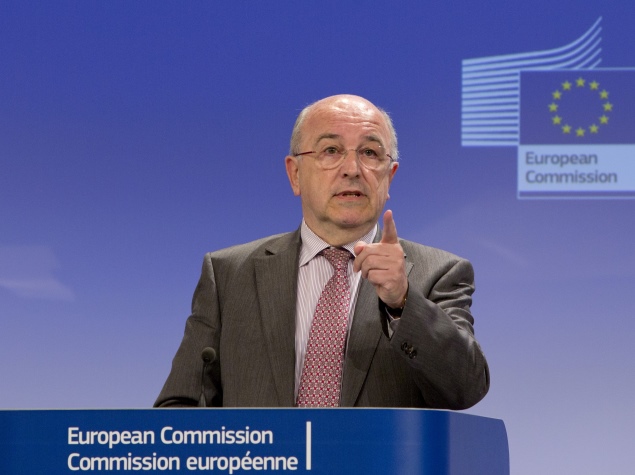 The European Union's antitrust watchdog is increasing pressure on Google to swiftly provide better proposals to address allegations the firm is abusing its dominant position in Internet searches.

If the U.S. tech giant fails to present better proposals to reach a settlement, the EU will start the traditional antitrust procedure, the EU's competition watchdog chief Joaquin Almunia said Wednesday. That more confrontational route could take years, but also result in fines worth billions of dollars.

Almunia said that feedback from competitors and other market players on Google's latest proposed changes to its Internet searches was clearly negative.

"So let's see if Google can improve their proposal or we go to the traditional route," he told reporters in Brussels.

The company has a market share of about 90 percent of Internet searches in Europe, compared with around 70 percent in the U.S.

Competitors in Europe have complained about the way it gives preference to its own Google-branded services at the top of results pages, especially when consumers are likely to be searching for something to buy.

The European Commission, which is the executive arm of the 28-nation European Union, has been investigating Google since 2010. Almunia has said he hopes to resolve the case by the spring of 2014.

Google, based in Mountain View, Calif., has offered to more clearly label search results stemming from its own services to allow users to distinguish between natural search results and those promoted by Google.

In its second round of proposals in October, Google's main concession was to offer competitors the chance to advertise their own services and brand in the second row of search results, below the Google-branded result.

Competitors led by Microsoft, but also including European consumer organizations, said that would only mean more costs for them and more dominance for Google. They argue the company should not give undue preference to any company in the search results.

The U.S. Federal Trade Commission has already investigated Google in a similar case and in January decided not to file charges.

Any restrictions that European regulators might place on Google would be valid only in the EU - a bloc of some 500 million people that is the world's biggest economy.