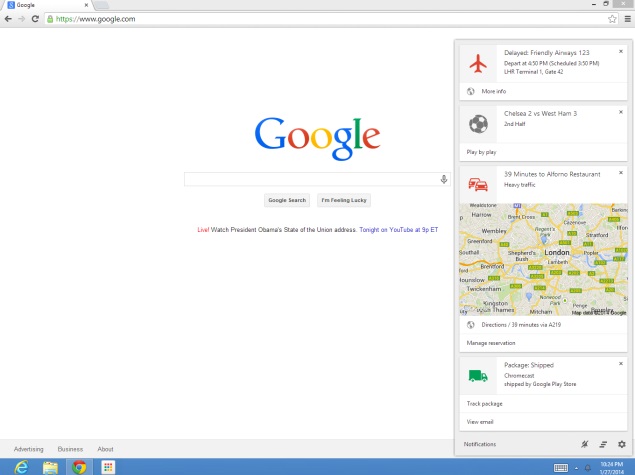 Google Now, a personal assistant developed by the Mountain View giant, which has been available in the Google Search mobile app for the Android and iOS operating systems, has now been announced for desktops. Google has revealed that the Google Now feature will be available for desktops via Chrome beta.

The search engine giant confirmed the news via its Google Chrome blog and announced that desktop clients who use Chrome beta will now receive the Google Now notifications centre on Mac, Windows or Chromebook computers.

The blog post further informs that users will have to sign in to Chrome with the same Google account they have been using for Google Now on mobile devices running Android or iOS operating systems. The blog post suggests that users can view the notifications by clicking on the bell icon on the desktop (on Mac and Windows) or the numbered box (on Chromebook) to open the Chrome notification centre.

As of now, the Google Now notifications in Chrome beta will be available in English initially, with other language support coming soon.

In addition, the search engine giant also released the Google Cast Software Development Kit (SDK) for developers, which would allow developers to easily build Chromecast support into their apps, making them into Google Cast-ready apps. John Affaki, Engineering Manager, Chromecast in a blog post revealed that the SDK is now available on Android and iOS as well as on Chrome through the Google Cast browser extension.

Google emphasised the ease of porting apps to the Google Cast framework, adding: "The Google Cast SDK is simple to integrate because there's no need to write a new app. Just incorporate the SDK into your existing mobile and web apps to bring your content to the TV."

The Google Chromecast was launched in July last year as part of the company's attempt to make it easier for people to access Internet content on their televisions. The Chromecast can be plugged into an HDMI port on flat-panel TVs and brings Netflix, Google's YouTube site and other Internet content.