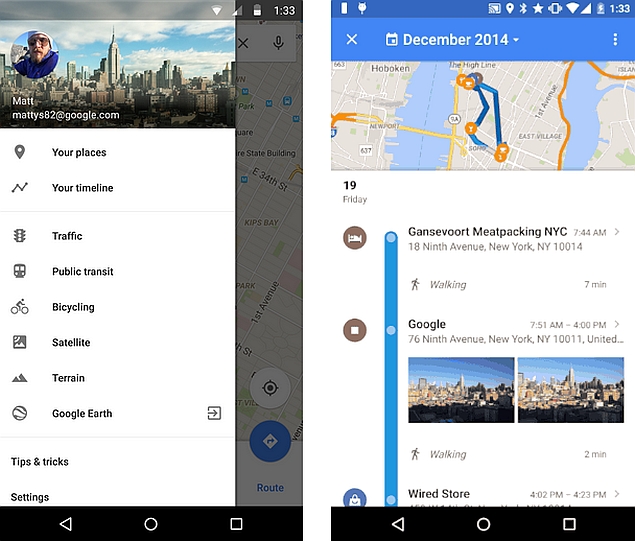 Google on Tuesday introduced a new feature for users called 'Your Timeline'. The feature is heavily based on the Google Maps service and is created to let users visualise 'real-world routines', trips of places and glimpses of locations where users have visited. It is visible in the Google Maps app and Web interface, and essentially provides a more user-friendly view of the user's location history with the ability to edit and delete.

Your Timeline, besides giving a scrollable view of the location users have been to, what they did there, for how much time, and how did they commute, also shows up images users might have captured if they are using Google Photos. "And if you use Google Photos, we'll show the photos you took when viewing a specific day, to help resurface your memories," says Gerard Sanz, Product Manager, Google in the company blog post.

Also noted is that the locations shown in Your Timeline would be visible only if users have switched on their 'Location History' in Google Maps. Switching it off would prevent Google from tracking the user's whereabouts.

Since this feature raises questions about how it affects a user's privacy, the Mountain View tech giant emphasises that Your Timeline feature would be private and visible only to users and no-one else. They can even control the locations they choose to keep, delete Your Timeline either by day or in its entirety, and also edit Your Timeline by changing the name of a frequent place (a feature being added alongside the custom name feature) on the map or deleting a specific location. Your Timeline for now is available only for Android (v9.12.0) and PCs. Locations given a custom name will show up alongside Saved Places in Your Places, called Named Places.

Google, a week ago announced a new Bluetooth Low Energy (BLE) beacon-based platform, dubbed Eddystone. The platform has been designed to let developers work with beacons to deliver location-based information to users on their smartphones.

Game of Thrones, PDF Forms, The Stanley Parable, And Other Apps Gone Free or on Sale
The Good Dinosaur Trailer Has an Ice Age Vibe