Google knows what Indians did this summer

Even if we are feeling the residual heat, summer is officially going to end very soon and as expected most of us used the summer vacations or other festival holidays to go out of town and enjoy, or at least that is what Google is suggesting.

In this connected world, we are dependent on Google to find us places to visit, satisfy queries related to booking tickets or search for places to stay and the search giant has used that data to show where people in the Northern Hemisphere have spent their summer days.

According to Google's maps search data, the tourist destinations were the most popular searches in India this summer, followed by railways, metro related queries and religious places. 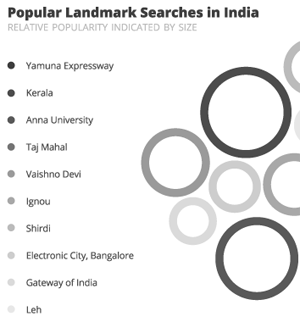 Similarly, in terms of the landmark searches, Yamuna expressway topped the list, probably because it connects New Delhi to Agra and Mathura, both of which are quite popular tourist destinations. Not to mention, the Yamuna expressway has reduced travel time between the Indian Capital to the Taj city by almost 1.5 hours.

It was followed by Kerala, Taj Mahal, Vaishno Devi, Shirdi, Gateway of India and Leh in the top ten. There were three landmark searches in the top ten that are not related to tourism and they are Anna University, IGNOU and Electronics City Bangalore.

You can guess the reason behind first two, as summers are also the college admission season in the country, while Electronics City Bangalore is popular as one of the biggest IT hubs in the country.

Out of India, Google suggests that beaches dominated as the popular destination in quite a few countries including Canada, Spain, France, US and Netherlands. The other popular activity this summer was camping. Let's not forget London Olympics, which that was the flavour of season in UK.

"North Americans sought out the best local beaches to help cool off from the summer heat. In comparison, many more people from Spain, Italy and France searched for community swimming pools. In cooler areas of the U.K. the rising Google Maps searches included many indoor activities such as squash, bars and going to the gym. And, as expected, travel was a clear choice for the summer, as indicated by a surge in searches for lodging in almost every region," stated Manik Gupta, Sr. Product Manager, Google Maps in a blog post.