Google has announced its all-new Google for Job initiative which will help job seekers find a job right from the Search. Google CEO Sundar Pichai kicked off I/O 2017 conference on Wednesday with a keynote address stressing on the company's new focus - AI (artificial intelligence). Under this umbrella, Pichai announced the Google for Jobs initiative - developed with the goal to help users find the right jobs using machine learning capabilities.

Under the company's new Google for Jobs initiative, the company will be launching a new feature in Search in the coming weeks that will help job seekers look for work. Pichai talked about why the company felt the need for Google Jobs as almost half of US employers were having issues filling open positions while job seekers weren't even aware about a job opening.

"We are now witnessing a new shift in computing: the move from a mobile-first to an AI-first world. And as before, it is forcing us to reimagine our products for a world that allows a more natural, seamless way of interacting with technology," wrote Pichai in a blog post. The new Google for Jobs search feature will be limited to the US market initially. 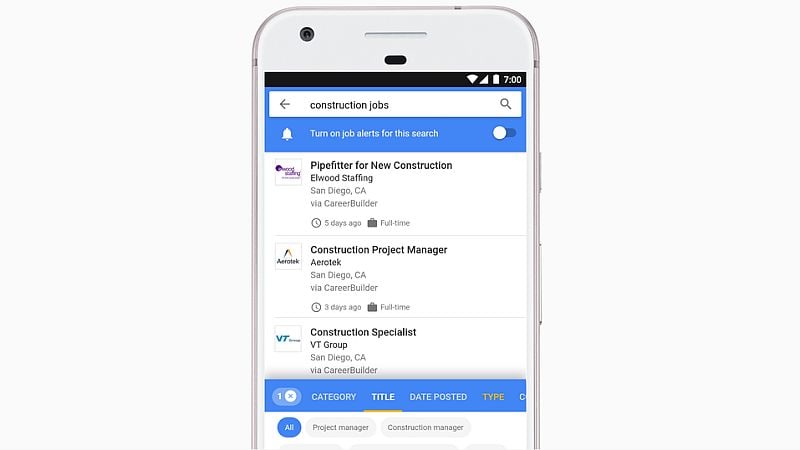 Google for its new initiative will initially partner with job listing sites like LinkedIn, Monster, Glassdoor, Careerbuilder, and Facebook among others. The company will further let job seekers filter job openings based on location, category, date posted, and full-time or part-time employment, and other options.

Notably, the company believes that the new search tool will make finding jobs that were traditionally harder to search for and classify, including service and retail jobs. Pichai also announced that some companies have been piloting the new Google for Job search tool like FedEx and Johnson & Johnson.

The company wasn't very clear on how the new initiative relates to its recent unveiling of Google Hire, a tool for managing job applicants.

Pichai also talked about how Google Search has evolved as a search engine tool that was built to understand text in webpage but has advanced in deep learning that can help in many more things that was not possible before.

Pichai also introduced the company's new tool dubbed Google.ai which can help researchers identify genetic variants more quickly. The company also launched a dedicated website, google.ai, which will be a centre point for all research related tools, and other AI based tools.

On Wednesday, Pichai also announced the company's new Google Lens, a smartphone camera-linked feature that will help users understand what's visible on the phone, and will even help users take action.

Detailing Google Lens, Pichai added, "Google Lens is a set of vision-based computing capabilities that can understand what you're looking at and help you take action based on that information. If you have crawled down on a friend's apartment floor to see a long, complicated Wi-Fi password on the back of a router, your phone can now recognize the password, see that you're trying to log into a Wi-Fi network and automatically log you in."