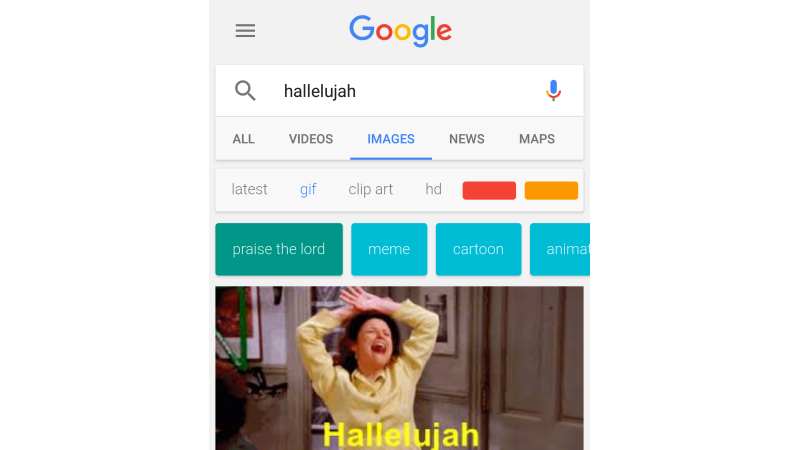 Google looks committed to improve its Image Search feature on the app and has now introduced a new tool that looks to compete with Pinterest. The Internet giant has added a new Image Search feature that will let you know the context and other relevant Badges to images indicating what else you can discover with a "single tap on an image". In addition, image search results will also start featuring a new GIF tab that will filter the images in GIF format. The feature is live on Google mobile Web and its Android app as well.

The new Pinterest-like search results feature is called Badges that will classify images based on the content behind them. Essentially, Google Image Search results will simply display deeper, contextual information of the image source, such as recipes and purchase information, and display it in a card with links to the original site, as well as Share and Save widgets. For instance, a Google Image Search made for ice cream will show several ice cream image results, and some will feature a 'recipe' or 'video' badge on them, depending on their source. You can further tap on 'recipe' to read the recipe, or 'video' to see the video it came from. You will also start seeing GIF images once you tap on the GIF tab on the top, in addition to further differentiating them from the videos.

Presently, Pinterest provides such features where you can pin and explore the content that a saved image is pointing to. However, the image-saving feature has been there for a while inside Google Search, the new Badges feature is an effort to take on its rival.

Google still lacks many features as compared with Pinterest that actually make interested viewers choose Pinterest over Google. Pinterest recently introduced a feature called Lens that lets people take pictures with smartphones from inside Pinterest applications, which then uses "visual search" to find similar items or themes playing off objects of desire

Facebook Said to Be Working on Video Chat Device, Standalone Smart Speaker
Amazon, in Sign of Growth, Holds Job Fair for US Warehouses