Inappropriate and offensive content has been cropping up on Google searches for a while, and one of the prime examples is the 'Holocaust' search that usually brought up racist site Stormfront's links on top. In a bid to understand and combat offensive content search results, Google has hired human 'quality raters' to evaluate worldwide results, and to flag offensive websites as 'Upsetting-Offensive'.

Google has hired 10,000 contractors, and these raters are given actual searches to conduct, and then then are asked to flag pages that appear in top results as 'Upsetting-Offensive', if they are found to be inappropriate. These raters cannot alter results though, and can only tell Google's algorithm about which link is offensive, and which isn't. The algorithm will then learn from these raters' evaluation, and won't plunge the 'Upsetting-Offensive' flagged websites in top rankings.

Search Engine Land reports that "quality raters use a set of guidelines that are nearly 200 pages long, instructing them on how to assess website quality and whether the results they review meet the needs of those who might search for particular queries."

Google aims to do this in a bid to combat offensive, racial, incorrect, and graphically violent content from showing up in search results. However, this doesn't mean that these sites will completely disappear from searches altogether. Determined searches of specific sites will still crop up as top result on Google.

Separately, Google is reportedly testing a new interface for its Search app, and a Reddit user claims that he can see the changes on beta version 6.14.17.21 running on Android 6.0.1 Marshmallow. This new interface separates recent searches into different categories like Images, Maps, In-App Searches and more, and the Images section also shows popular searches from the web. The Reddit user was kind enough to share screenshots of the new interface as well, and you can take a look at the recent searches interface change below. 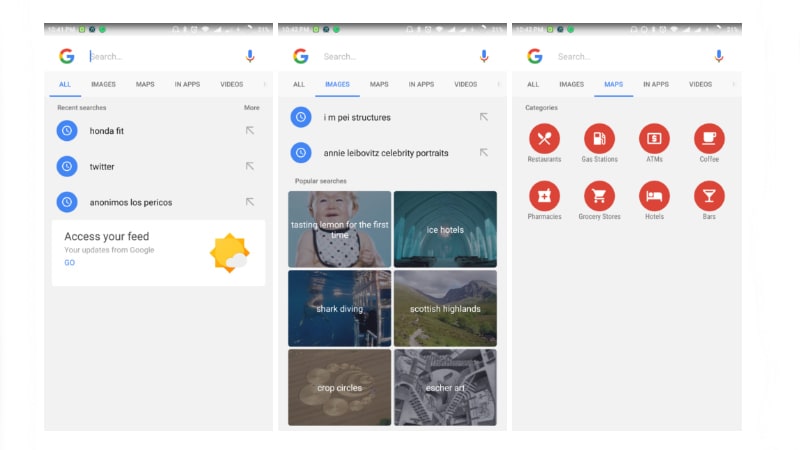 Further reading: Google, Google Offensive Search, Quality Raters, Internet
Tasneem Akolawala Email Tasneem Tasneem Akolawala is a Senior Reporter for Gadgets 360. Her reporting expertise encompasses smartphones, wearables, apps, social media, and the overall tech industry. She reports out of Mumbai, and also writes about the ups and downs in the Indian telecom sector. Tasneem can be reached on Twitter at @MuteRiot, and leads, tips, and releases can be sent to tasneema@ndtv.com. More
Shovel Knight: Treasure Trove Developer on Nintendo Switch, New amiibo, and the Lack of an Xbox One Physical Release
Why India Is Going to Be Taxi Service Grab's Payments Think Tank