Google announced Wednesday it would provide EUR 27 million ($29.7 million or roughly Rs. 203 crores) to 128 news organisations in Europe as part of its "Digital News Initiative."

Agence France-Presse is one of the organisations selected, for its platform of interactive graphics developed for users of AFP web and mobile media formats around the world.

Google, which has been reorganised as a unit of the holding company Alphabet, had previously announced it was setting aside EUR 150 million to help European news outfits in new projects that help them adapt to the digital landscape.

"We are committed to ongoing discussion between the tech and news sectors," Pichai said in his remarks at the Paris Institute of Political Studies, known as Sciences Po.

"To promote innovation in digital journalism. And play our part in building a more sustainable news ecosystem."

The funds offered by Google aim to "stimulate innovation in digital journalism" and will be spread out over the coming three years, he said. 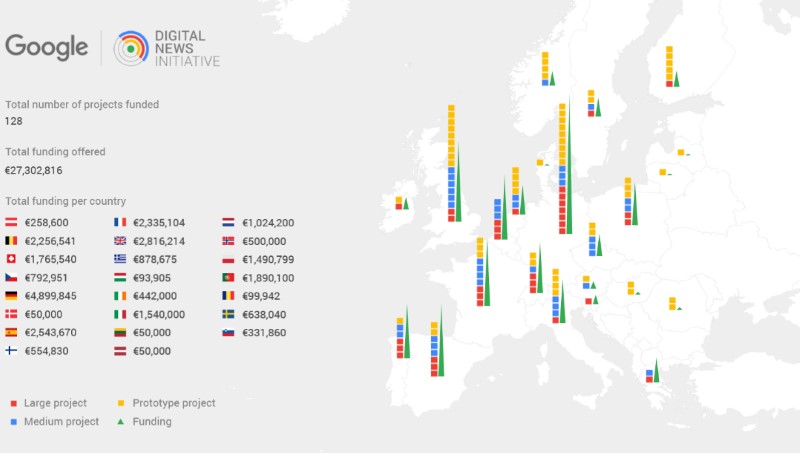 "The aim is to spark new thinking, which could come from anywhere, to give news organisations of all sizes the space to try new things and get projects off the drawing board and into production," Pichai said.

"But let me be clear: participating in the Digital News Initiative is not about buying into Google's worldview. It is about discussion, debate, and getting things done together. It's open to everyone involved in news in Europe."

Pichai said the funds would go to a range of organisations "from small startups to large, established news players" and include projects "ranging from automated content personalisation and robot journalism, to hoax busting apps and tools to verify social media in real-time reporting."

The graphics will be produced in all six of AFP's working languages, hosted by AFP, and integrated across digital platforms in a responsive manner.

The project involves creating interactive graphic units, establishing an infrastructure for production and translation, and a beta platform to demonstrate and deliver the product to clients.