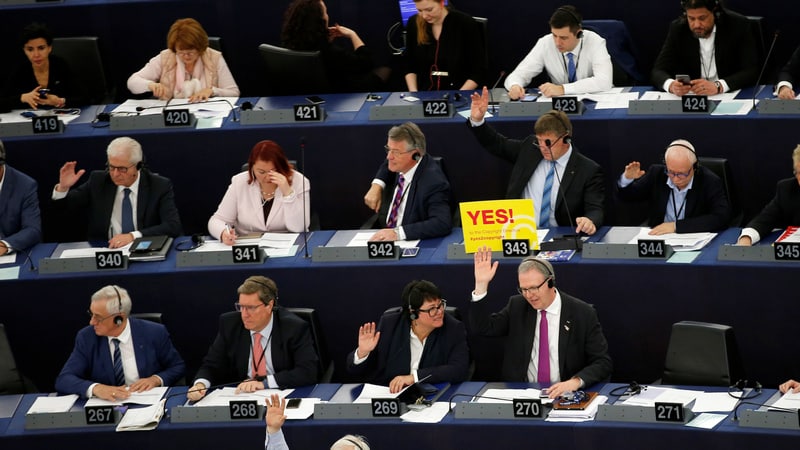 European Union lawmakers approved a copyright directive Tuesday intended to give writers and artists more protection of their creative rights and incomes. But outspoken critics say the contentious measure could have major implications for US tech companies and could censor anyone who posts on the Internet.

The European Parliament voted 348-274 to pass the online copyright bill, with 36 abstentions. Opponents argued the legislation, which had been in the works for three years, would stifle freedom and creativity online. The EU's member countries gave the measure preliminary approval in February and have final reviews set for next month.

The directive largely updates existing copyright law. If enacted, companies such as Apple, Facebook, and Google parent company Alphabet likely would have to pay European artists more and do more to keep work that appears online from being used without permission.

But two sections of the legislation have become particularly controversial — one because it would make companies responsible for proactively filtering out copyrighted material that is uploaded to their online platforms. The other concerns how information from news organisations is linked and quoted.

"Web giants have been able to benefit from content created in Europe by paying derisory taxes, transferring huge profits to the US or China," European Parliament President Antonio Tajani said. "Parliament has chosen to put an end to the existing digital Wild West."

Lobbying against the bill by Internet giants was said to be so intense that even after EU members gave their provisional support, passage wasn't viewed as a sure thing Tuesday. More than 5 million people signed an online petition trying to prevent the directive from passing, saying the measures would unfairly censor posts online.

The directive would put the legal onus on companies to ensure that copyrighted material was not being uploaded to their sites — including through user posts on sites like Facebook and YouTube, said Gus Rossi, global policy director at Public Knowledge, a nonprofit that advocates for an open Internet.

Companies are not required to, but would likely have to monitor for that by using artificial intelligence systems that are taught to recognise known copyrighted materials, he said.

Advocates are concerned that such filters have two problems. Only the largest companies like Google and Facebook could afford to build and maintain them, pricing out smaller firms. And even when built, these systems almost certainly won't be completely accurate, meaning some materials that should be allowed online will be caught and deleted.

"The average consumer is not an expert in copyright law," Rossi said. "Most likely, most consumers won't pursue recourse. That will create a chilling effect in most situations."

Supporters of the directive say it will protect creators' rights to get paid for their work.

German EU lawmaker Axel Voss, who was the bill's lead backer, let out a massive sigh when the vote tally flashed up on a screen inside the European Parliament building in Strasbourg, France.

"We have agreed a new set of rules which will do exactly the opposite of killing the Internet," Voss said.

After the vote, Google said in a statement that the bill "will still lead to legal uncertainty and will hurt Europe's creative and digital economies. The details matter, and we look forward to working with policy makers, publishers, creators and rights holders as EU member states move to implement these new rules."

The company has spoken out against pieces of the directive over the past year, saying it is overbroad and could cause the removal of posts and YouTube videos when it's unclear who holds which rights.

EDiMa, an association of European tech companies, said in a statement that the version approved Tuesday improved on earlier drafts, but "we still fundamentally disagree with it, as it undermines other EU law, tries to force a licensing business model on open platforms, and weakens the fundamental privacy and freedom of speech rights of EU citizens."

Tens of thousands of people marched in cities across Germany over the weekend to protest what the EU sees as reforms and what critics see as restrictions that could lead to online censorship.

Outside parliament, a French band performed music to push the point that artists need higher payments and better copyright protection.

"There is nothing like free lunch, and I don't know why the giant techs should carry on, you know, having a free lunch on our expense," French music producer Wally Badarou said.

In France, ever the guardian of European culture, the government greeted the bill's passage with relief.

"The EU message is clear," French Culture Minister Franck Riester said. "Everyone intervening on the European market must respect our common preferences, whether it is copyright or fiscal rules" that require America's tech companies to pay more taxes in Europe.

The leader of the EU parliament's liberal ALDE group, Guy Verhofstadt of Belgium, countered the bill's critics by saying the cards had been stacked so much in favor of "monopolistic American companies" that it was ridiculous to talk about a free Internet.

"The only freedom you have is to send your data mainly to US companies who are using it for their profit. That is all," Verhofstadt said during Tuesday's session.

But open Internet advocates in the US stress that the directive could stifle traffic to news organisations and censor people's posts online.

Filtering systems to catch copyright issues often give crude matches, said Cory Doctorow, a bestselling novelist and special consultant to the Electronic Frontier Foundation. A filter could catch, for instance, a new photographer's timely photo and delete it because in the background it shows a bus ad with a copyrighted image.

"They can probably make tuna nets that catch all the tuna, provided you don't care how many dolphins they catch at the same time," he said.

The directive would need to be implemented by all EU member states into their own national laws, leaving room for separate interpretations.

Apple Escapes One Import Ban in Qualcomm Fight, Faces Another
Google to Announce Deal With Cuba on Improving Connectivity: Report