Vikram Sarabhai has been commemorated in a Google Doodle on Monday. ISRO has also announced an award in his name on his 100th birthday. 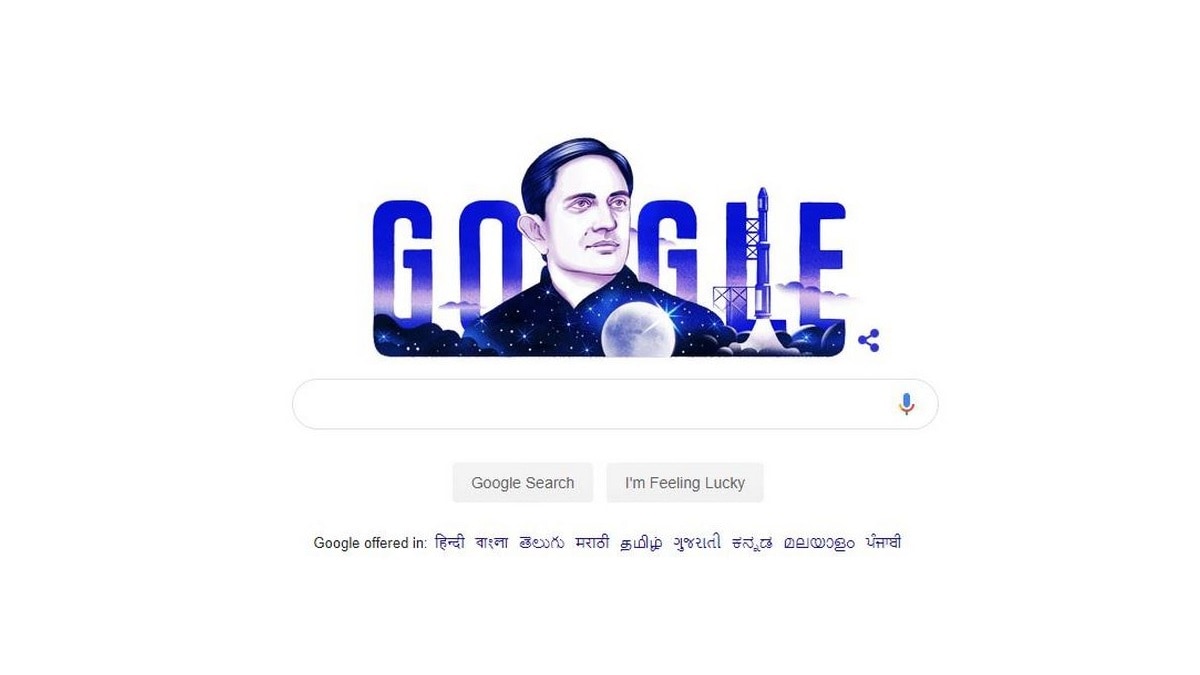 Vikram Sarabhai birthday: Google has posted a doodle on the occasion.

As Chandrayaan-2 cruises to reach the moon by August 20 and drop a lander called 'Vikram' on the Earth's sole satellite on September 7, Google on Monday celebrated the 100th birthday of Dr. Vikram Sarabhai -- father of the Indian space programme -- with a Google Doodle. ISRO has also announced an award in his name on his 100th birthday.

"There are some who question the relevance of space activities in a developing nation. To us, there is no ambiguity of purpose.

"We do not have the fantasy of competing with the economically advanced nations in the exploration of the moon or the planets or manned space-flight," emphasised Sarabhai upon the importance of a space programme during his successful dialogues with the Indian government.

"But we are convinced that if we are to play a meaningful role nationally, and in the community of nations, we must be second to none in the application of advanced technologies to the real problems of man and society," he noted.

The establishment of the Indian Space Research Organization (ISRO) was one of his greatest achievements which broke many global records in days to come.

Born on August 12, 1919 in Ahmedabad, Sarabhai was one of the eight children of Ambalal and Sarla Devi, according to the ISRO website.

The Sarabhai family was an important and rich Jain business family. Ambalal was an affluent industrialist and owned several mills in Gujarat.

He matriculated from the Gujarat College in Ahmedabad after clearing the Intermediate science examination.

After that, he moved to England and joined the St. John's College at University of Cambridge. Sarabhai then went on to receive the Tripos in Natural Sciences from Cambridge in 1940.

The tripos framework includes a wide range of natural sciences from physical sciences to biology which are taught alongside the history and philosophy of science.

With the escalation of the World War II, Sarabhai returned to India and joined the Indian Institute of Science in Bangalore and began research in cosmic rays under the guidance of Nobel winner C.V. Raman.

A great institution builder and established or helped set up a large number of institutions in diverse fields, he was instrumental in establishing the Physical Research Laboratory (PRL) in Ahmedabad. He was only 28 at that time.

The centre was established at Thumba near Thiruvananthapuram on the coast of the Arabian Sea, primarily because of its proximity to the equator.

"After a remarkable effort in setting up the infrastructure, personnel, communication links, and launch pads, the inaugural flight was launched on November 21, 1963 with a sodium vapour payload," says ISRO.

Sarabhai started a project for the fabrication and launch of an Indian Satellite. As a result, the first Indian satellite, Aryabhata, was put in orbit in 1975 from a Russian Cosmodrome.

The Vikram Sarabhai Space Centre (VSSC) at Thiruvananthapuram today is the major centre of ISRO, where the design and development activities of satellite launch vehicles and sounding rockets are carried out and made ready for launch operations.

Sarabhai was honoured with the Padma Bhushan in 1966 and the Padma Vibhushan (posthumously) in 1972.

He was also Chairman of the Atomic Energy Commission. Along with other Ahmedabad-based industrialists, he played a major role in the creation of the Indian Institute of Management, Ahmedabad.

To pay homage to the father of India's space programme, ISRO has also announced an award in his name on Vikram Sarabhai birthday.

Married to Mrinalini Sarabhai and father of noted dancer and activist Mallika Sarabhai, he died in Kovalam, Thiruvananthapuram, on December 30, 1971.

His son Kartikeya Sarabhai is one of the world's leading environmental educators and a dedicated community builder.

Needless to say, the Indian space programme has aptly lived to his expectations.