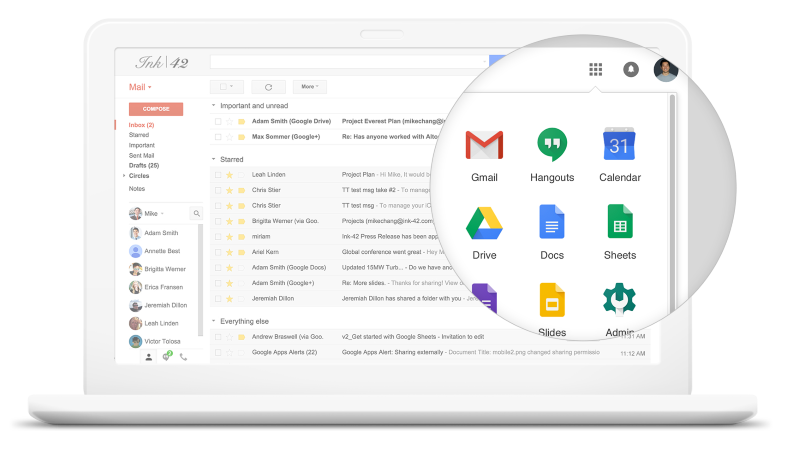 The new group, run by Google executive Diane Greene, includes web-based work software such as Docs and Sheets, machine-learning and digital-mapping tools that other companies can rent over the Internet, and Android phones, tablets and Chromebook laptops designed for office users, Google said in a statement.

"It's uniquely Google - a broad set of technologies and products from all parts of the cloud," Greene said at a company event in San Francisco.

Google's work software, renamed G Suite, has been around for years and is popular with individuals, startups and other smaller companies. While these programs have always been offered over the web, they weren't delivered as part of a broader cloud computing service. Greene is combining them to offer a fuller range of services to companies looking to move applications and other work functions to cheaper, more flexible rented data centers.

Google also said Thursday its cloud service now has more than one billion end-users, through the products and services that other companies run on its servers. And Urs Holzle, Google's longtime infrastructure boss, said Google had invested $11.2 billion (roughly Rs. 74,669 crores) on its cloud division over the past twelve months. He didn't share revenue numbers.

Google also said it had picked up two new cloud customers, retailer The Home Depot Inc. and Pokemon Go, the viral mobile game. Over the last year, Google has pushed aggressively to woo larger cloud clients, which have in the past mostly gone to Amazon, Microsoft or used their own computer servers and data centers.

Google also introduced a new customer support unit within its cloud division, called Customer Reliability Engineering. Google engineers will work closely with other companies' operations teams to make sure important cloud applications run reliably, Google said. It's a necessary upgrade. Despite its technical prowess, Google has faced criticism for not managing customer relations as carefully as competitors like Amazon.

Greene, a Silicon Valley veteran and Google board member, joined the search provider full time in November to revamp its cloud and corporate software efforts. Since then, she has hired more sales and marketing staff and presided over several acquisitions, including the recent $625 million purchase of software developer Apigee.

Greene's early work has started to show up in Google's bottom line. Parent company Alphabet Inc. reported in July that "Other" revenue rose 33 percent to a record $2.17 billion in the second quarter, driven by cloud and corporate software businesses.