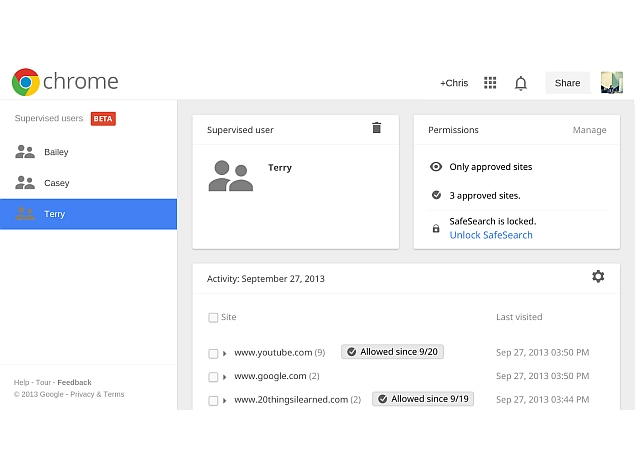 Google has updated its Chrome web browser to version 32 for Windows OS, OS X and Linux with some new features, most importantly, the promotion of the 'noisy' tab feature, and other changes from the Chrome 32 beta, which it had introduced back in November 2013

Other the new features included in the latest iteration of the Chrome browser are better security pop-ups for malware blocking, the "Supervised Users" feature for family usage, and a new "Metro" interface for Windows 8 users. The changes were announced on the official Chrome blog.

Chrome users can now quickly track tabs playing video or audio files, useful if they have several tabs open at a time, with an icon representation. The users will also be able to view those tabs using a webcam or are being casted to their TVs.

Additionally, according to Google, the browser's improved features will track down malicious files and will display a pop-up before the file gets downloaded, saying 'This file is malicious, and Chrome has blocked it' in the download tray. The pop-up can be dismissed if they feel the file is safe. The browser already offers Safe Browsing program that warns users before they visit malicious websites or download malicious files.

The users can also try out the "Supervised users" feature which will help the family members while using the browser by guiding them and restricting them from the websites listed by the admin user. The websites can be managed by visiting chrome.com/manage. This feature, for now, can be used as a beta preview by the users.

Lastly, Google has updated Windows 8 'Metro' mode, with an integrated Google app launcher that will also help manage multiple windows. The desktop app for Windows 8 also gets redesigned, with UI elements like form controls and scroll bars to match the sleek design sported by the Chrome Metro interface. This feature was previously seen in the Chrome 32 beta, which came out in November 2013.