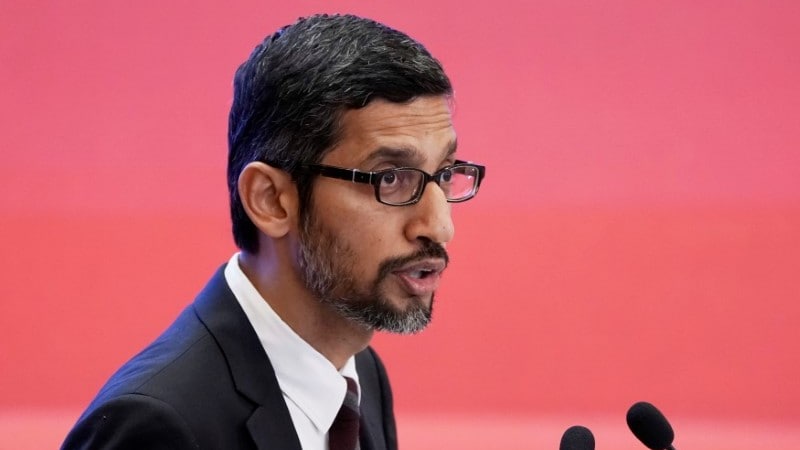 Google chief executive Sundar Pichai paid a rare visit to Washington on Friday to defend the search giant against allegations that it silences conservatives online, part of an effort to defuse political tensions between the company, Congress and the Trump administration ahead of a key hearing on Capitol Hill later this year.

Weeks after President Donald Trump accused Google of having "rigged" search results, the company's leader paid the White House a visit, meeting on Friday with Larry Kudlow, one of the president's top economic advisors, a spokeswoman for the White House confirmed. During the private session, which focused on "issues impacting internet platforms and the economy in general," Pichai agreed to attend an upcoming "roundtable with the President and other Internet stakeholders," the White House announced.

The spokeswoman said details would be forthcoming, including other tech giants invited to the meeting. Previously, Kudlow said the Trump administration was open to regulating search results but the president later seemed to distance himself from the idea.

Earlier Friday, Pichai also sought to face his critics on Capitol Hill. In a meeting with a dozen House Republicans, GOP Leader Kevin McCarthy, Calif., stressed to Pichai that party lawmakers are concerned about "what's going on with transparency and the power of social media today," particularly given the fact that Google processes 90 percent of the world's searches.

Google has long denied that it censors conservatives. Pichai explained during the roughly hour-long meeting with lawmakers how the company sets up its teams and codes its algorithms to prevent bias, according to a person who attended the meeting and spoke on the condition of anonymity.

Pichai's trip to Washington comes in anticipation of his appearance at a hearing later this fall, at which lawmakers have stressed they will press him not only on charges of censorship but also on other issues facing the company - including the privacy protections it affords users and its ambitions to relaunch its search engine in heavily censored China.

After huddling with lawmakers, Pichai described his conversations as "constructive and informative," adding in a statement that Google is "committed to continuing an active dialogue with members from both sides of the aisle, working proactively with Congress on a variety of issues, explaining how our products help millions of American consumers and businesses, and answering questions as they arise."

But Pichai's personal outreach - the beginning of more to come - caps off a bruising month for Google in the nation's capital. Along with Trump's recent attacks, fears about the tech industry's size and power dominated a meeting this week between the Justice Department and state attorneys general, where some officials expressed an openness to investigating Google and its tech industry peers on privacy and antitrust grounds.

Others in Washington question whether Google and the rest of the tech industry are prepared to stop foreign governments, like Russia, from spreading propaganda online ahead of November's elections. Yet Google infuriated lawmakers when it opted against sending Pichai or Larry Page, the chief executive of parent company Alphabet, to testify at a Senate hearing this month on the matter. Instead, lawmakers left an empty chair at the witness table to reflect Google's absence and pilloried the company anyway on a range of issues.

In a sign that some Democrats and Republicans remain miffed at Google, Sens. Richard Burr, R-N.C., and Mark Warner, D-Va., - the leaders of the panel that had asked Google to testify - declined to meet with Pichai this week, according to two people familiar with the matter who were not authorized to speak on the record. Burr's office declined to comment; a spokesman for Warner confirmed the matter.

Instead, Pichai huddled beginning Thursday with lawmakers like House Democratic Leader Nancy Pelosi, Calif., and Sen. Brian Schatz, D-Hawaii, spokesmen confirmed. Schatz used the opportunity to press Google on its privacy practices, his aide said, as he and other lawmakers weigh whether they should pass new regulations restricting the way tech giants collect and monetise users' data.

At Friday's meeting, Rep. Bob Goodlatte, R-Va., the chairman of the House Judiciary Committee, said he and his peers had "served notice" to Pichai to expect questions on topics including "antitrust issues" and allegations of conservative bias. The date of the hearing in front of the panel has not been announced.

Some Republicans also pressed Pichai on Google's ambitions in China, though Pichai stressed that Google is far from a final decision on whether to launch a censored version of its search engine there, according to Goodlatte.