Google is yet to officially acknowledge the issue. 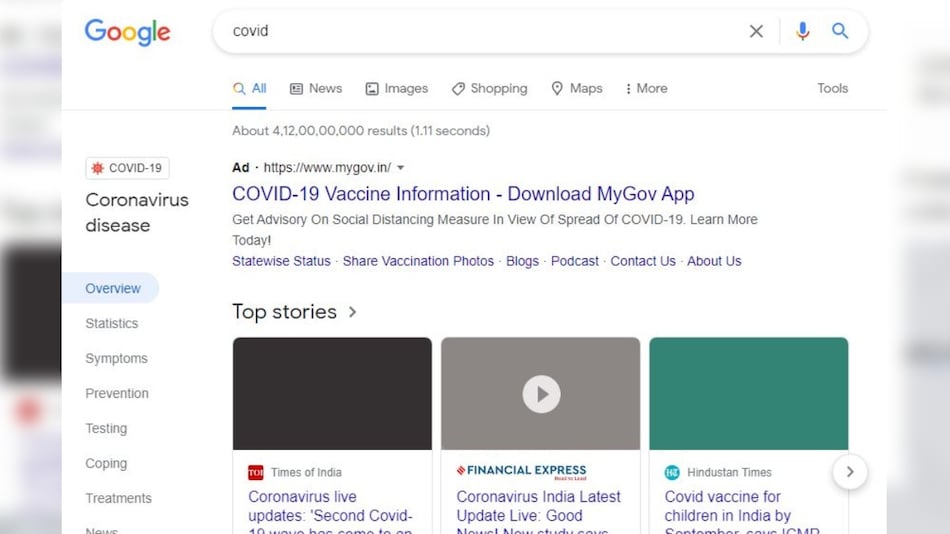 Google Search is showing blank, or broken, images on its Top Stories carousel. When you search any topic on Google, the Top Stories panel — that shows the most read news reports from various media outlets — is now showing blank or blurred image thumbnails. The problem began cropping up since Wednesday morning, and several users have flagged the issue on Twitter with screenshots. The broken image issue still persists, and Google hasn't offered any acknowledgement or explanation for this as of yet. We've reached out to the company for comment.

The thumbnails on the Top Stories carousel appears blank or blurred. If you're using a desktop browser, you should ideally see three stories at the top of the carousel. In some cases, some of the thumbnails appear fine while some others don't. In most cases, however, all three thumbnails appear blank, blurred, or broken. A similar issue is seen on Google's mobile browser as well.

In this screenshot, some of the thumbnails are appearing fine
Photo Credit: Screenshot/ Gagdets 360

As per a report by Search Engine Roundtable, the issue has been cropping up since August 18 morning. Several users took to Twitter to share screenshots of the issue. Some users tagged Google's Public Search Liaison Danny Sullivan, Google Search Advocate John Mueller, and others, enquiring if this is related to some specific keywords or an overall glitch.

Is it a bug or Google filtering images related to specific Keywords @dannysullivan @JohnMu @rustybrick pic.twitter.com/Xp4X6aMxKB

@dannysullivan - Top Stories article's images are showing blank on Google.
It's a temporary bug or any new practice we have to follow for news articles? @JohnMu @rustybrick @nishu_kadian pic.twitter.com/Bpng2trKhs

At the time of writing, Google has yet to officially acknowledge the issue and offer an explanation on why this is happening. It is also not known yet by when a fix could be expected. Gadgets 360 has reached out to Google. This report will be updated when we hear back. It should be noted that apart from the image issue, everything else seems to be working fine as the links on the carousel are opening up properly on their respective news websites.