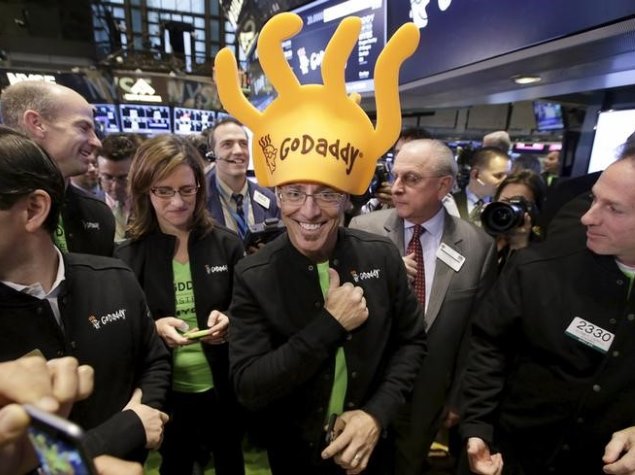 GoDaddy Inc's shares rose as much as 34 percent in their debut on Wednesday, valuing the Web hosting and domain registration company at up to $5.48 billion, including debt.

The company raised $460 million after its initial public offering of 23 million class A shares was priced at $20 per share, above the expected range of $17-$19.

GoDaddy sold all the shares in the offering.

The company's rivals include Endurance International Group Inc and Web.com Group Inc as well as Amazon.com Inc and Google Inc, which have recently entered the domain registration business.

GoDaddy, the sponsor of race car driver Danica Patrick, had about 13 million customers across 37 countries as of December 31.

The company manages about 59 million domains, nearly a fifth of the world's total domains, it said in its IPO filing.

Founded in 1997 by Bob Parsons, GoDaddy is led by Blake Irving, a former chief product officer at Yahoo Inc.

GoDaddy filed for an IPO in 2006 and later withdrew it due to unfavourable market conditions. The company was acquired in 2011 by a private equity consortium led by KKR & Co LP and Silver Lake Partners LP for $2.25 billion, including debt.

Parsons will hold nearly 24 percent of GoDaddy's class A shares and 40 percent of class B shares after the offering.

The Scottsdale, Arizona-based company, known for its controversial ads, attracted the ire of animal rights activist earlier this year with its Super Bowl commercial featuring a website selling puppies.

Morgan Stanley, JP Morgan Securities and Citigroup were the lead underwriters for the IPO.