Go rafting through the Grand Canyon with Google Street View 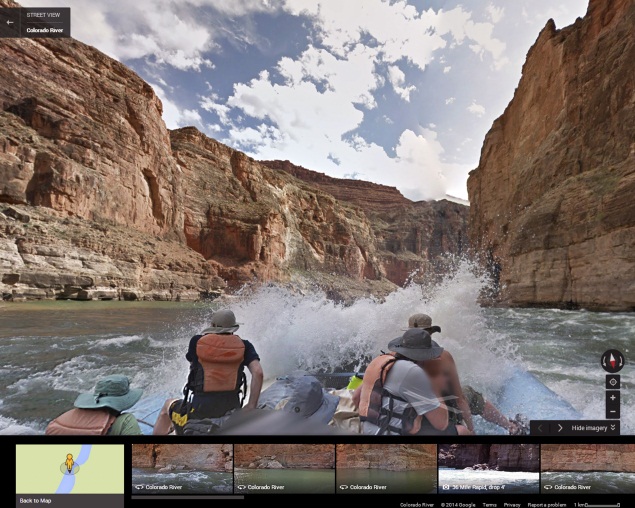 Google has taken its all-seeing eyes on a trip that few experience: the Colorado River through the Grand Canyon.

The 360-degree views that went live Thursday in Google's Street View map option once were reserved largely for rafters who were lucky enough to board a private trip through the remote canyon, or those willing to pay big bucks to navigate its whitewater rapids.

Google project lead Karin Tuxen-Bettman hopes the images educate the public about the U.S. waterway that American Rivers listed as the most endangered in 2013 due to drought and overuse.

"We hope this inspires viewers to take an active interest in preserving it," she said.

Federal officials and environmentalists have been raising alarms recently about demand outstripping supply on the river serving some 40 million people in seven Western states.

The imagery Google captured from Lees Ferry south of Page to Pearce Ferry shows signs of drought in a bathtub ring around Lake Mead, and the impacts of damming the river.

"It's just a valuable snapshot in time of what the river is like right now," said Amy Kober of American Rivers.

Google used two rosettes of cameras mounted on two rafts to capture the imagery in August and then stitched it together. The crew of nearly 20 people, including guides, spent eight mostly sunny days on the river, but got drenched by rain two of those days.

The company said the river views are the first it has published on Street View from the United States. In 2011, Google mounted its Street View trike on a boat and went up the Rio Negro, a tributary of the Amazon, Tuxen-Bettman said. 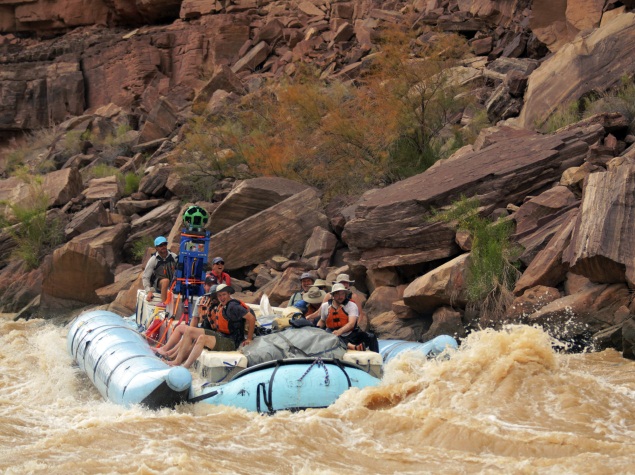 The company also has used push carts and snowmobiles to map places where vehicles cannot travel. In late 2012, Google mapped the most popular hiking trails at the Grand Canyon using cameras mounted for the first time on a backpack. Those panoramic views were released in early 2013.

For rafters on the Colorado River, trips can cost anywhere from several hundred dollars to $3,000 a person, depending on the length and whether they are private or commercial trips. Grand Canyon National Park limits the number of people who can go on self-guided trips through a highly competitive lottery system and has an annual cap on the number of commercial, motorized trips.

One of the first things virtual visitors might notice is the remoteness of the canyon where rafters spend a few days or nearly a month navigating whitewater rapids, hiking side canyons, snapping photos of waterfalls and endangered species, and savoring the solitude. It's a place where cellphones don't work and rafters pack only what they need.

Rich Harter went on his first commercial trip in 1997 and has returned for rafting trips six times since. He generally directs new visitors to the Internet to check out videos of rafts flipping over on the river and the commotion that goes along with it. He said he'll now use Google's Street View of the Colorado River as another introduction to something that often is indescribable.

"The scale is so immense and the geology is so varied, and the time frame over which the canyon formed is just so long," he said. "How do you describe these things to people that haven't seen them? You can't.
Comments