Alongside receiving a new design, Gmail is now apparently set to become smarter with "self-destructing" emails. The new feature is expected to help users configure an expiration date with the emails that they don't want to be available after a certain time. Apps such as Line, Signal, and Snapchat already offer similar experience by letting users set a timer with a message that they want to disappear after a certain time.

As spotted in few screenshots leaked by TechCrunch, the ability to build self-destructing emails will be available through a 'Confidential mode'. The mode will prevent emails from being forwarded, downloaded, copy/ pasted, or printed. Furthermore, users will be provided with an option to add a passcode that will be generated by Google and will provide a two-factor authentication for private messages.

There are different expiration periods for self-destructing emails, including a week, month, or year or even multiple years. Also, since the mode appears within the compose screen, it won't be a cumbersome process for users to make any of their emails self-destructing. 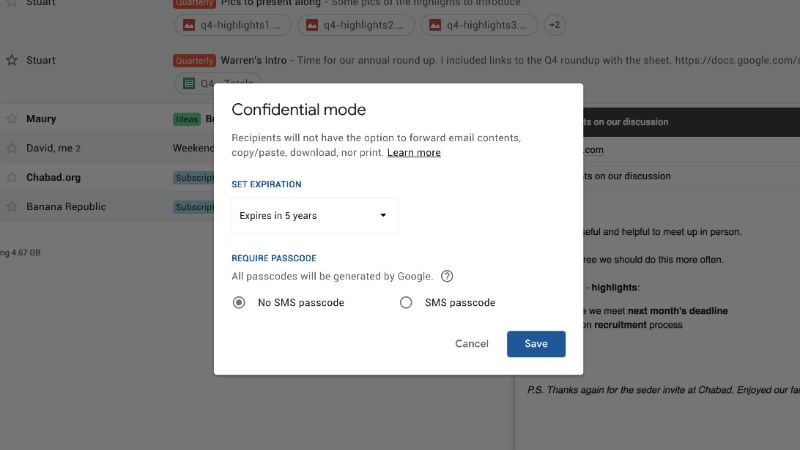 Importantly, the feature is backward compatible with the existing Gmail version, and recipients of self-destructing emails will receive a link to view the confidential content. It has also been noticed that the recipients will need to log into their Google account once again to view the email at their end. While the content of the emails in question will not be copied or pasted or even printed, there isn't any restriction on capturing the secret text or image by taking a screenshot.

Google hasn't revealed any plans to bring self-destructing emails to Gmail. Likewise, the details reported by TechCrunch suggest that the Confidential mode is initially available for a small group of users. Having said that, it could come alongside the redesigned Gmail that has recently been showcased in the Early Adopter Program. It is expected to bring a clean look of Gmail's desktop version as well as include the ability to snooze emails and a Smart Replay feature on the Web interface. This refreshed Gmail model is expected to come as a "new Gmail experience" in the coming weeks.

HP Finds an Opportunity in the Marijuana Industry
Jio vs Airtel vs Vodafone vs Idea vs BSNL: Best Recharges Under Rs. 300 Compared