Google has just made sharing images simpler by few clicks as it introduces an 'Insert Photos' option in its Gmail service. The new feature allows users to insert photos that were auto backed-up to Google+ from their Android or iOS phones.

The 'Insert Photo' feature, when clicked, will show a grid of 'Auto Backup' images available in the user's Google+ account starting with most recently uploaded ones. "Starting today, you can save time and insert your Auto Backup photos from your phone into Gmail messages on the web using the new Insert Photo button," states Thijs van As, product manager of Google's Gmail team on the official blog.

Resizing of inline images while composing a message is also possible, for which users would simply have to click on the corner of the image and drag it as per the needed size. 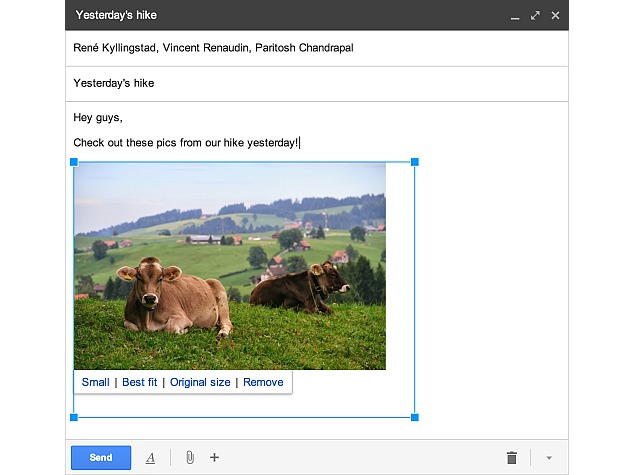 Last month, Google updated its Gmail application for iOS users. The update is said to save a good amount of users' time by "pre-fetching" their Gmail messages before they open the app.

The updated Gmail for iOS app is compatible with iOS 7 and higher versions. Users would need to turn on background app refresh and notifications (badge, alert, or banner) for the Gmail app. The Gmail for iOS app, once logged into by users, would give automatic access to other Google services such as "Maps, Drive, YouTube and Chrome." This however, eliminates the need for going through the search giant's two-step verification process every time users log into different Google services.