Flipkart to shut down Flyte MP3 Music store on June 17 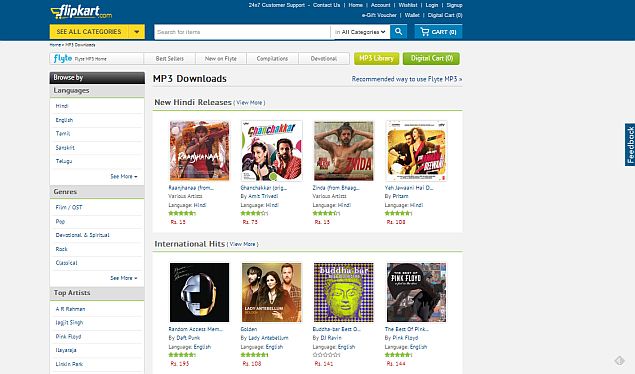 Flipkart has announced that it is shutting down its Flyte MP3 music store with effect from June 17 2013.
The leading Indian e-commerce company sent an e-mail to its users informing them about the same. It advised users to use their Flyte wallet balance by the same date, although it would refund the unused Flyte balance even if they're unable to use it. Users will be able to download all the MP3 files that they have purchased from Flyte on or before June 17, 2013 till August 18, 2013 from their digital library.

In an official statement, Flipkart's Mekin Maheshwari, Head - Digital Media and Payments said, "We set up Flyte MP3s a year back in what was an extremely nascent industry. The aim was to bring legal digital content to consumers in India. In a short span of time we built a massive digital music catalog at very affordable prices along with a loyal base of nearly 100,000 customers. "

"However, we have realized that the music downloads business in India will not reach scale unless several problem areas such as music piracy and easy micro-payments etc. are solved in great depth. Which is why, we feel that at present, it makes sense to take a step back from Flyte MP3s and revisit the digital music market opportunity at a later stage," he added explaining the reason for shutting down the store.

Flipkart had launched the Flyte music store in February 2012 offering music downloads across various genres and categories. It had also launched an online wallet in order to facilitate micro-transactions for digital downloads. With Flyte shutting down, the only other legal ways to download music in India is through Apple's iTunes Store, Hungama's music store and Nokia Music.

Here's the complete text of the email that Flipkart sent to its users:

We hope you have enjoyed the music we have made available to you.

Unfortunately the Flyte MP3 store will no longer be operational after June 17, 2013. We request you to use your Flyte Wallet balance, if any, by that date. But if for some reason you are unable to do this then not to worry. We will refund the unused Flyte wallet balance to you.

If you would like to purchase any more music before the Flyte MP3 store shuts down, then please do so by June 17, 2013. All the MP3 files that you have purchased from Flyte on or before June 17, 2013 will continue to be available for download in your digital library till August 18, 2013. So do remember to download all your favourite music by then.

1. Monday, June 17, 2013: You will no longer be able to purchase MP3 files from Flyte after this date. The remaining balance in your Flyte wallet, if any, will be refunded to you.

2. Sunday, August 18, 2013: You will no longer be able to download your purchased MP3 files from your digital library after this date. So please download all your music by then.