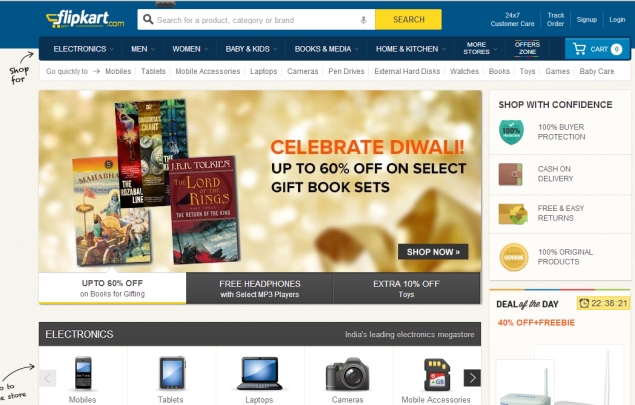 Flipkart, India's answer to US online giant Amazon, said Saturday its sales would cross the milestone $1 billion-mark (roughly Rs. 6,100 crore) this year, ahead of schedule, in the country's exploding e-commerce market.

"In March 2011 we announced by 2015 we wanted to hit $1 billion" in sales when they stood at just $10 million (roughly Rs. 61 crore), said founders Sanchin Bansal and Binny Bansal, who happen to share the same surname but are unrelated.

Now the privately held firm expects to hit $1 billion in sales "one year before our target" which means "we've grown 100 times in the last three years," the pair, who pool operational responsibilities, said in a statement.

The Bansals are seen as typical of the new risk-ready breed of entrepreneurs that has emerged in India amid years of fast economic growth, relying not on inherited wealth but their own-start up talents to launch businesses.

While there were already Indian online sellers, Flipkart helped sales take off by allowing customers to pay cash-on-delivery, a move Nangia calls a "game-changer".

An increasing number of Indians are going online but they are uncomfortable giving credit card details over the Internet. Others do not have a credit card and the Flipkart method allows them to place orders.

It has yet to report a profit in the fiercely competitive market with its nearest rival, eBay-backed Snapdeal, targeting $1 billion turnover by mid-decade. The world's biggest online retailer, Amazon, also entered the market last June.

More retailers are seen going online as real estate is costly "so it makes it hard to have bricks-and-mortar stores", said Nangia.

Now, months after putting retail store plans in India on hold, the world's largest retailer, Walmart, is readying a major e-merchandising push in the country based on the Amazon model, media reports say.

Is your business at risk from old software?
Mt. Gox faced 150,000 DDoS attacks per second ahead of crash: Report