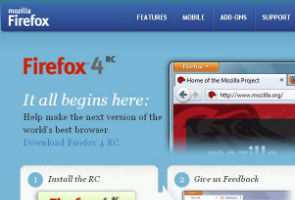 Highlights
Firefox 4 is now available for download and comes with a plethora of changes both aesthetically as well as under the hood. The first thing that you will notice is the change in tabs layout and the address bar. It looks a lot neater than its predecessors and has an IE9 feel to it. The tabs are located above the address bar giving them a more visual presence. It is now possible for a user to switch between tabs from the comfort of the address bar itself.

Firefox also helps you stay in sync on multiple devices. You can synchronize your settings, passwords, bookmarks, history, open tabs and other customizations across multiple devices such as your smartphones.

Managing add-ons and organizing your tabs is as simple as drag and drop on Firefox 4.

Firefox 4 claims to be 3-times faster and 6-times improved when compared toFirefox 3.6.12.

Under the hood, Firefox 4 is a beast!! With the new JavaScript engine, not only does the browser render web pages faster, but has also improved upon the startup time. It also includes support for WebM for HD-videos. The latest version also has very fast graphics acceleration with Direct2D and Direct3D on Windows and OpenGL on the Mac. Firefox 4 also supports multi-touch making it an ideal browser for mobile devices.