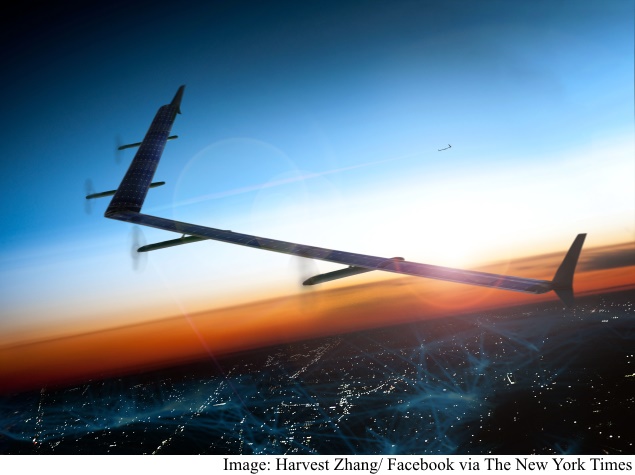 The test flight of a drone prototype dubbed "Aquila" took place in Britain and was considered a milestone in an internet.org project to bring online access to billions more people around the planet.

"Aircraft like these will help connect the whole world because they can affordably serve the 10 percent of the world's population that live in remote communities without existing Internet infrastructure," Zuckerberg said in a post on his Facebook timeline.

The unpiloted aerial vehicle, or drone, has a wingspan greater than that of a Boeing 737 passenger jet and weighs about as much as a small car, Facebook chief technology officer Mike Schroepfer told a packed audience at the social network's annual gathering of developers in San Francisco.

"The idea is to loiter over an area for months at a time and beam down Internet service," Schroepfer said.

Drones powered by the sun will fly at altitudes of 60,000 feet or higher and be able to remain aloft for months, according to Zuckerberg.

Schroepfer estimated that anywhere from one billion to three billion people lack access to the Internet that most of those attending the developers conference likely took for granted.

Connecting everyone to the Internet is one of the core challenges Facebook intends to tackle in coming years, according to Schroepfer.

Adding 'teleportation,' services
He laid out a Facebook vision of efficient, massive data centers to provide online services to all of those people, along with making computers smart enough to help deal with the inevitable overload of information flooding the Internet.

Facebook made an artificial intelligence "memory network" breakthrough on a path to getting machines to recognize images or videos and give context to words, according to Schroepfer.

The latest version Oculus headgear, called Crescent Bay, was being shown off at the gathering.

"Sooner or later, you will want to be a part of it."

Abrash said that Oculus would begin shipping virtual reality headgear in quantity "before too long."

He predicted that, over time, virtual reality will incorporate body movements, nearby objects, and users' environments.

"A lot of important pieces are not in place yet, but all that will get figured out," Abrash said.

Getting developers to build fun, hip, or functional applications for devices or platforms is seen as crucial to success in markets.

Other virtual reality gear is in the works from Japanese electronics giant Sony, while Valve and Taiwan-based smartphone maker HTC are working together on Vive virtual reality headgear.