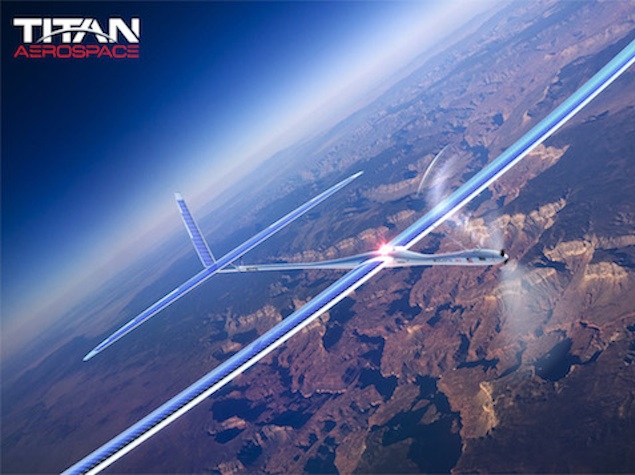 Facebook Inc is in talks to buy drone maker Titan Aerospace for $60 million, according to media reports.

The high-flying drones would give Facebook, the world's No.1 Internet social network, the ability to beam wireless Internet access to consumers in undeveloped parts of the world, according to the technology blog TechCrunch. TechCrunch first reported the deal late on Monday, citing an anonymous source.

The effort would help advance Facebook's Internet.org effort, aimed at connecting billions of people who do not currently have Internet access in places such as Africa and Asia.

Titan Chief Executive Vern Raburn declined to comment on whether Facebook was buying the company or a large order of its planes.

"I can't comment one way or the other," Raburn said in a telephone interview on Tuesday.

Titan is developing a variety of solar-powered "atmospheric satellites," according to the company's website, with initial commercial operations slated for 2015. The drones, which fly at an altitude of 65,000 feet (20 km) and can remain aloft for up to five years and have a 165-foot (50-metre) wingspan, slightly shorter than that of a Boeing 777.

"What we have is an airplane that's solar-powered, so it doesn't have any fuel and it can climb up to a very high altitude and just stay there. And at that altitude it can do a multiplicity of missions ranging from communications, data, optical, weather sensing," Raburn said.

"Think of it as a Tesla Model S, with wings," he said, referring to the electric car. Raburn, who was previously the CEO of Symantec Corp and the president of Microsoft Corp's consumer products division, said that Titan has flown a scaled-down prototype of the plane.

Facebook is interested in having Titan build 11,000 of its Solara 60 model drones for its Internet.org project, according to the TechCrunch report.

Facebook is not the only Internet company working on bringing wireless Internet access to developing countries. Last year, Google Inc announced Project Loon, which aims to use solar-powered air balloons to beam the Internet to remote regions.

Providing wireless access could help Facebook ensure that its online social network is among the basic services used by people in developing economies as they start to use Internet-connected mobile phones in coming years.

Facebook, which has 1.2 billion monthly users, has partnered with numerous wireless providers in recent years to offer free or discounted access to the social network. But some, such as Vodafone, have balked at waiving their wireless data rates for Facebook.