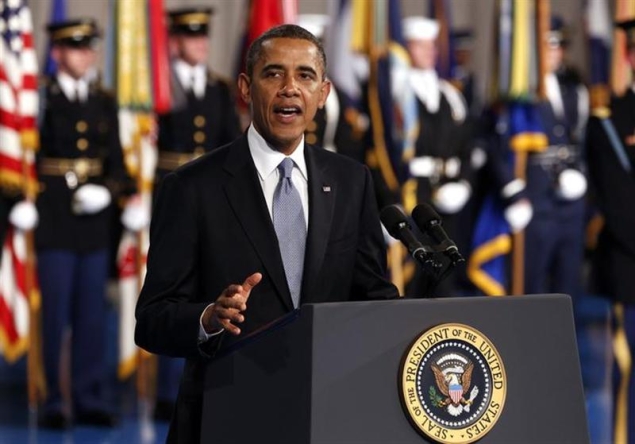 The president sought to provide reassurances that the administration is putting in place reforms to intelligence collection after revelations of widespread collection of data stirred outrage.

"The president reiterated his administration's commitment to taking steps that can give people greater confidence that their rights are being protected while preserving important tools that keep us safe," the White House said.

But Facebook's Zuckerberg, a public critic of government data gathering practices, said that more needed to be done.

"While the U.S. government has taken helpful steps to reform its surveillance practices, these are simply not enough," he said through a spokesperson.

"People around the globe deserve to know that their information is secure and Facebook will keep urging the U.S. government to be more transparent about its practices and more protective of civil liberties," he said.

Obama in January outlined a series of limited reforms to NSA data gathering, banning eavesdropping on the leaders of friendly or allied nations and proposing some changes to how NSA treats Americans' phone data.

The most sweeping program, collection of telephone "metadata," comes up for reauthorization next week, on March 28.

Obama has asked Attorney General Eric Holder and the U.S. intelligence community to report back to him before that deadline on how to preserve the necessary capabilities of the program, without the government holding the metadata.

"Frustration over the damage"
An industry source said invitations to Friday's meeting with Obama were received on March 15, two days after Zuckerberg blasted U.S. electronic surveillance practices in a widely read public post on Facebook.

"I've called President Obama to express my frustration over the damage the government is creating for all of our future. Unfortunately, it seems like it will take a very long time for true full reform," Zuckerberg wrote.

Some of the largest U.S. technology companies, including Google, its rival Yahoo Inc, social networking site Twitter Inc and others, have been pushing for more transparency, oversight and restrictions to U.S. government's gathering of intelligence.

Facing criticism for their own collection practices involving users' data, the companies have also sought to clarify their relationships with U.S. law enforcement and spying agencies since June, when leaks to the news media by former NSA contractor Edward Snowden began to show the extent of U.S. spying capabilities.

Media reports based on secret documents disclosed by Snowden have detailed how the U.S. government may have tapped into communications cables that link data centers owned by Google and Yahoo, and intercepted user data.

The NSA has pushed back against the media reports that rely on Snowden leaks, calling many of them inaccurate and saying the spying programs are critical to U.S. national security.

Snowden is wanted in the United States on espionage charges and is living in asylum in Russia.

Friday's meeting is not the first on the matter for Obama and the tech industry leaders. In December, a larger group of tech executives, including also Microsoft Corp, AT&T Inc and Apple Inc, urged the administration to rein in the government's electronic spying.

Executives from several other companies, including Yahoo and LinkedIn Corp, were said to be unable to attend Friday's meeting because of scheduling conflicts.

DoT may ask CAG to drop objections over entry-fee adjustments
Apple developing a set-top box, in talks with Comcast for streaming service: Report