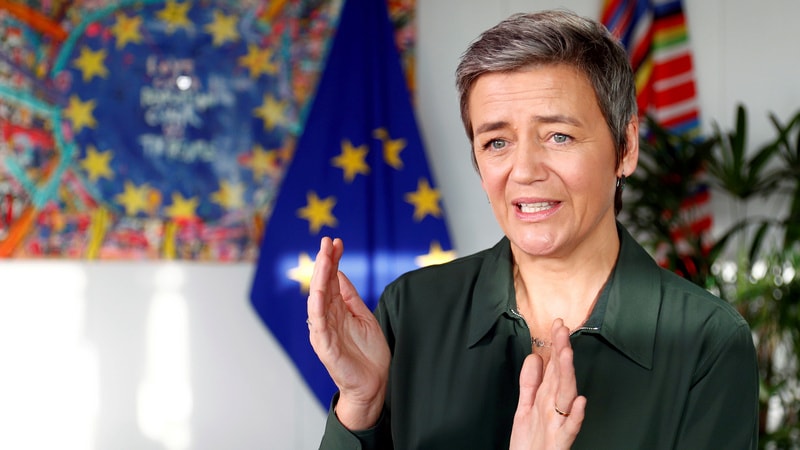 The European Union's top competition cop says her preliminary investigation into Amazon's data practices is in "quite advanced" stages.

Margrethe Vestager - who has emerged as the world's toughest Big Tech regulator - is racing against the clock to determine whether to bring a formal antitrust case against the e-commerce giant before her term as commissioner ends in October. Her team is probing whether Amazon uses the data it collects from businesses that sell products on its platform to inform its own product sales and undercut its competitors. (Amazon founder and chief executive Jeff Bezos owns The Washington Post.)

"Since it's not given that I can continue for the commissioner for competition, I would like to take more decisive steps before I have to go," Vestager told a small group of reporters at South by Southwest. "We're pushing it for obvious reasons."

As Europe seeks to crack down on Big Tech, Vestager is especially focused on the competition issues that arise when companies are both marketplaces that host other sellers -- and retailers competing to peddle their own products. Vestager wants to make sure the biggest players that drive the digital economy - a la Amazon - are not abusing their market dominance and hurting consumers as they use data from competitors to inform their own business decisions.

A formal case against Amazon could set the tone for how policymakers across the world - even in the US - might treat the issue.

It extends far beyond one e-commerce giant, Vestager said. "Amazon is not the only one," she said. "Google also has this nature because they also are being the navigation tool to find a lot of businesses, businesses that they themselves compete with."

Vestager said Google Shopping is another example of her worries. In 2017, she fined Google for steering customers to its own service that lets people compare products from around the Web over competing online shopping services.

That $2.7 billion fine and others have built Vestager's reputation as Silicon Valley's top nemesis across the pond. And at a time when many American politicians are just talking about antitrust and reining in Big Tech, Vestager has built a record on taking action. She also fined the search engine a record-setting $5 billion for forcing Android phone manufacturers to pre-install the Google search app and Chrome app on the phones. She's also fined Amazon and Apple for failing to pay taxes.

As 2020 Democratic presidential candidates steered the conversation at South by Southwest toward how they would regulate the technology industry, there was perhaps no more appropriate year for Vestager to attend the festival.

But her approach differs from that of presidential hopeful Sen. Elizabeth Warren, who gave an impassioned pitch at the festival for her plan to break up Big Tech.

When asked about Warren's plan, Vestager said Europe could also try to break up the companies through legislation. "It would for us be an issue of the very, very, very last resort," she said.

Warren, D-Mass., and Vestager are concerned about the same competition issue, though. In our interview, Warren said she wanted to break up Amazon so it could not unfairly use the data it collects from sellers to compete with them.

"It's like in baseball. You can be the umpire; that's like the platform," Warren said. "Or you can own the team; that's one of the businesses. But you don't get to be the umpire and own the team in the league."

As Vestager looks long-term at the work she wants to do to ensure European authorities are prepared to address competition issues involving technology, she tells me she's closely watching the hearings the U.S. Federal Trade Commission is holding on how the agency should address digital challenges.

"I really like this approach, that they get a stock taking," she said. "We're interested as colleagues and colleagues from my services will come over and have a listening ear."