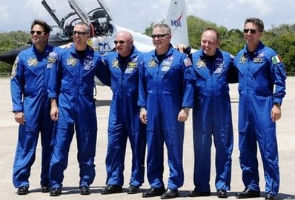 Highlights
YouTube on Wednesday invited users to submit questions for the crew of the US space shuttle Endeavour, which blasts off on Friday on its final mission to the International Space Station.

The Google-owned video-sharing site said Endeavour commander Mark Kelly and other members of the crew will answer questions from YouTube viewers on May 2.

The interview will be streamed live on the YouTube channel of PBS NewsHour at 2:15 pm (1815 GMT).

Questions for the Endeavour crew can be submitted by video or in writing at youtube.com/pbsnewshour or on Twitter using the hashtag #utalk2nasa.

The most popular questions among YouTube viewers will be asked during the interview.

YouTube is also providing a live stream of Endeavour's launch on Friday, which is scheduled to take place at 1947 GMT at Kennedy Space Center in Cape Canaveral, Florida.

The space shuttle Discovery flew its final mission in March and Atlantis is scheduled to fly one last time in June.
Comments