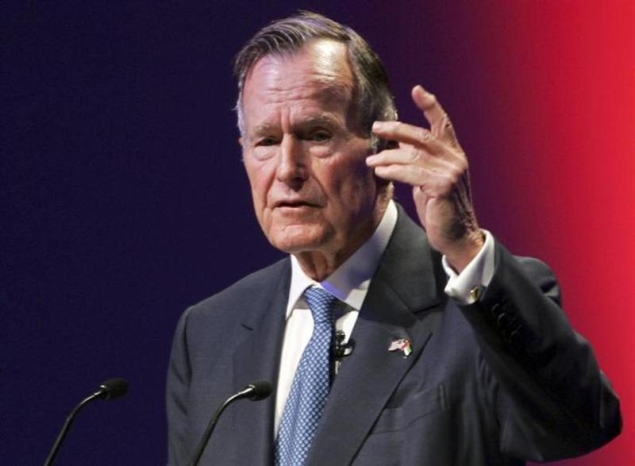 The U.S. Secret Service is investigating the hacking of email accounts belonging to members of the Bush family that divulged correspondence, addresses, phone numbers and a picture of a self-portrait painted by former President George W. Bush standing in a shower.

A report on the Smoking Gun website, said the pilfered emails provided a rare glimpse into the private lives of one of America's most powerful political dynasties. The Bushes are only the second family in U.S. history to send a father and son to the White House.

The website said a hacker known as Guccifer raided the email accounts and posted the photos online. The pictures include an image of former President George H.W. Bush, who was released from a Houston hospital last month after seven weeks of treatment for bronchitis and related ailments, in a hospital bed.

Another photo showed the elder Bush, 88, posing outside a home with Bill Clinton, who was president between the two Bushes.

The intercepted photos also featured a portrait painted by George W. Bush of himself showering. It shows a gray-headed man, nude from the waist up, regarding the viewer with Bush-like features from the reflection in a shaving mirror. Another painting in the same style shows a pair of legs in a bathtub.

Other photos showed Bush painting a picture of a house and posing with a cut-out of himself in an artist's smock, beret and mustache.

The U.S. Secret Service is investigating whether former President George H.W. Bush's email was hacked as well, the agency said on Friday. A Bush family spokesman declined to comment.

Among the material that was lifted were an October 2012 list of home addresses, cell phone numbers and email addresses for the former presidents and other relatives, according to the Smoking Gun.

The site said the emails revealed that when the elder Bush was in poor health, George W. Bush wrote his siblings the day after Christmas to say he was "thinking about eulogy."

"Hopefully I'm jumping the gun," he said, "but since the feeling is that you all would rather me speak than bubba, please help."

"Bubba" is a well-known sobriquet for Clinton.

Since leaving office in 2009, Bush has taken up painting portraits of Texas landscapes and dogs. He has live a reserved life, largely hidden from view, with his wife, Laura, in Dallas.

Bush is likely to make a more sustained return to the spotlight when his presidential library, located at Southern Methodist University in Dallas, is completed and dedicated in April.