eBay to Slash 2,400 Jobs; May Spinoff or Sell Enterprise Unit 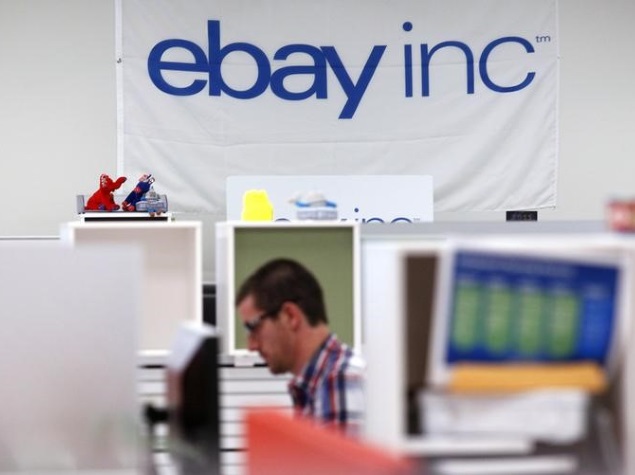 Online retail giant eBay will slash 2,400 jobs seven percent of its workforce in the current quarter as it restructures and prepares to spin off its PayPal finance unit, it said Wednesday.

California-based eBay unveiled the move as it announced its profit in the fourth quarter rose to $936 million (roughly Rs. 5,759 crores) on $4.9 billion (roughly Rs. 30,150 crores) in revenue. The job cuts will be across eBay's three divisions: Marketplaces, Enterprise and PayPal.

The reorganization will return eBay to its roots with the "Marketplaces" division, which includes its auctions and online retail sales and accounted for nearly half its 2014 revenues.

"We will be simplifying organizational structures to focus the businesses and ensure that we are set up to compete and win," said eBay, which also plans to explore options to separate the Enterprise division, which creates online sites for traditional retailers.

eBay announced plans last year to spin off PayPal amid pressure from activist shareholder Carl Icahn, and said the move would help the unit compete better in the fast-moving online payments segment.

In a further move to refocus, eBay said it would likely also shed its Enterprise division in a sale or public offering which creates an independent company.

"Enterprise is a strong business and a leading partner for large retailers, managing mission-critical components of their e-commerce initiatives," a statement said.

"However, it has become clear that it has limited synergies with either business and a separation will allow both to focus exclusively on their core markets, as we create two independent world-class companies."

eBay said it reached a "standstill agreement" with Icahn that calls for Icahn Capital executive Jonathan Christodoro to be named to eBay's board.

Icahn said in a separate statement that Christodoro would "have the ability to transition to PayPal's board once the spinoff occurs."

The deal also includes limits on any "poison pill" for PayPal that could block a proposed buyout.

"PayPal's charter documents will contain a number of corporate governance provisions that we suggested and which we believe will greatly enhance shareholder value at PayPal," Icahn said.

Strong finish
Chief executive of eBay, John Donahoe, said the overall company is in good shape ahead of the reorganization, which will spin off PayPal in the second half of the year.

"In a year of unexpected events and distractions, we ended 2014 with double-digit revenue growth, solid earnings growth and strong cash flow, reflecting the fundamental strengths of our company," he said in the statement.

"PayPal had another strong quarter, finishing an excellent year. eBay, while facing challenges, continues to be a great business and is focused on stabilizing performance and engaging its core customers."

PayPal accounted for 44 percent of eBay revenue in 2014, but it is facing new challenges amid a shift to mobile payments and new entrants to the market, such as Apple and Google.

Icahn has said that the payments sector needs "consolidation" either through acquisitions by PayPal or by merging it with "another strong player in the industry."