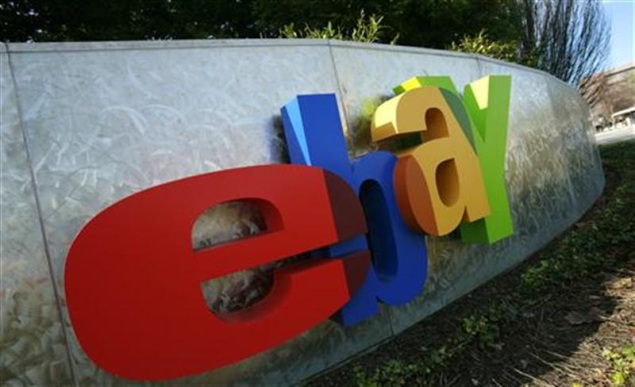 EBay Inc, once a scrappy auction site for mom and pop sellers, is enticing some of the world's largest retailers by arguing it can help them compete better against e-commerce leader Amazon.com Inc.

EBay Chief Executive John Donahoe and other executives have been telling retailers that Amazon is their enemy, while eBay is a friend because, unlike Amazon, it holds no inventory.

Amazon buys products wholesale, stores them in inventory and sells them to consumers at higher prices like all retailers. EBay says it just matches buyers and sellers.

That message is sinking in, especially among brick and mortar retailers that are losing market share to Amazon.

The foundations of eBay Now rest on Milo, a start-up eBay acquired in late 2010 which lets merchants upload in-store inventory onto eBay's online marketplace. When shoppers search on eBay now, they see what online sellers are offering, but also which nearby physical stores carry the product.

EBay has more than 100 million active shoppers on its online marketplace, he noted.

"Retailers don't have those kinds of numbers coming to their sites and buying," Schachter said. "They would love to only sell through their own site, but they have to go where the buyers are, and many are on eBay."

Barnes & Noble, which has been hammered by Amazon, has had an eBay storefront since late 2010 and mostly uses it to sell refurbished Nook gadgets. Toys and books were added in May 2011.

"EBay has been an exceptional partner, working with Barnes & Noble to effectively promote Nook to its massive user base," said Barnes & Noble spokeswoman Mary Ellen Keating. "Amazon is a competitor. We don't sell on Amazon and have no plans to do so."

Toys "R" Us does not sell on Amazon either. More than a decade ago, the largest toy retailer had exclusive rights to supply some toys on Amazon's website. That partnership ended in litigation and Amazon is now a leading toy retailer in its own right.

"It's the worst-kept secret in the retail industry," said Mulpuru. "When you partner with Amazon, they are looking at your data, learning your business and have ambition to get into every category."

Among the 100 largest retailers in the United States, most are choosing eBay over Amazon, according to Scot Wingo, chief executive of ChannelAdvisor, which helps merchants sell on both online marketplaces.

Amazon's marketplace for third-party sellers is growing rapidly and Wingo said that would not be happening if all retailers thought Amazon was the enemy.

The lure of Amazon's massive customer base is still powerful for many.

"We take any chance of getting new eyeballs and Amazon is just so large in the world of e-commerce," said Jerry Deboer, senior vice president of marketing at Jos. A. Bank, which has Amazon and eBay stores.

RadioShack also has both, and big retailers including Office Max and Sephora run Amazon stores.

EBay takes a cut of sales, so higher-volume sellers may help the company generate more revenue and profit.

EBay and retailers declined to discuss fees. However, eBay charges less for top sellers and negotiates individual deals with the biggest and best, according to Wingo.

EBay has struggled in the past because some of the products on its site were listed poorly or of questionable quality, and customer service from small sellers is not always what it could be. Big retailers are more likely to sell higher-quality products, categorize them more and provide better service.

EBay shoppers often search for deals, so some retailers use eBay to sell end-of-season or outlet products at lower prices.

EBay provides data to retailers to help them check if the shoppers who come to their eBay storefronts overlap with their existing customer base, according to Michael Jones, vice president of merchant development at eBay.

"By and large, people see this as a very significant incremental channel for them," Jones said.

In early 2010, eBay started including storefront inventory in results when shoppers searched on the website's front page. That has helped retailers place their products in front of more consumers, according to Jones.