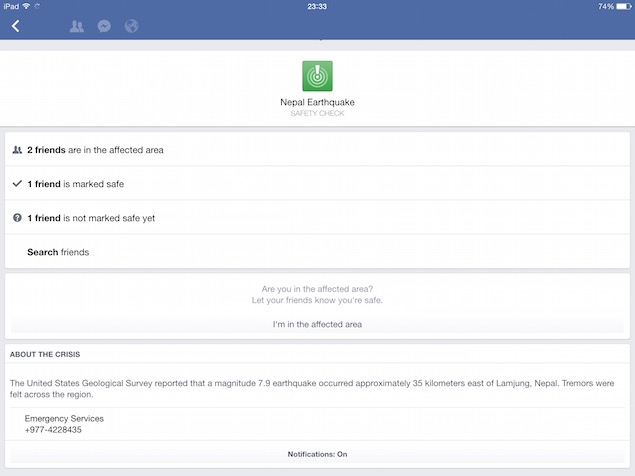 A devastating earthquake with its epicentre in Nepal struck the Himalayan nation and its neighbouring countries on Saturday. With thousands dead and extensive damage to property, the immediate concern of people is to contact loved ones in the region and ensure their safety. Those in the impacted region are also trying to get in touch to let family and friends know they are safe. Tech and telecom companies are doing their bit to lend a helping hand.

Google has launched the 2015 Nepal earthquake person finder that can be of help if you are looking for someone. The tool can also be shared to communicate the whereabouts of someone you know. The service can be also be used via SMS.

Facebook has also launched Safety Check that automatically lets people in the impacted region inform others about their safety. "When disasters happen, people need to know their loved ones are safe. It's moments like this that being able to connect really matters," CEO Mark Zuckerberg wrote on his Facebook page. "If you're in one of the areas affected by the earthquake, you'll get a notification asking if you're safe, and whether you want to check on any of your friends."

Indian telecom companies have made calls to Nepal discounted or completely free. Messaging app Viber has made outgoing calls to landlines and mobiles free users of its Viber Out service.

"Starting 11 pm, 25th April , MTS India is treating all calls made from its network to Nepal as local calls i.e Rs. 1/ minute. This is being done for the next 48 hours to support disaster relief efforts and to enable concerned callers to reach out to their friends and family," MTS India said in a statement. The company later extended the concessional call rates by a day.

In a statement, Tata Teleservices Ltd. said, "... to support disaster relief measures, charges for all calls to Nepal on the Tata Docomo network are reduced to 1 paise /second between 26th to 28th April."

Airtel said: "We are deeply saddened by the severe impact that one of the worst earthquakes in Nepal has had on the lives of its people. As a small gesture during this hour of crisis, we have decided to offer all calls on the Airtel network from India to Nepal completely free of cost for the next 48 hours [Monday, Tuesday] effective midnight, thus enabling customers across the country get in touch with their families and friends in Nepal."

‎"Vodafone is facilitating all calls made to Nepal at just Re.1 per minute against the regular call rate of Rs. 12 per minute with immediate effect up to 10:00hrs on 28th of April 2015‎," the company said in a statement.

Aircel also said it is offering its customers free calls to Nepal up to April 28, adding, "The offer has been extended to all prepaid and postpaid customers of Aircel."

In response to the earthquake in Nepal, messaging application Viber has switched off 'Viber Out' billing in Nepal, so Nepalese users can make free calls to mobile and land line numbers anywhere for the next 48 hours (starting Sunday), the company said in an email statement. Calls to Nepal via Viber Out have also been made free.

Microsoft-owned Skype is also offering free calls both to and from Nepal mobile phones and landlines, and the company in a blog post said "we want to help provide people with alternative methods of communication to reach friends and family in the region during this difficult time and therefore, we are making all Skype calls to landlines and mobiles in and out of Nepal free of charge, with immediate effect."

State-run BSNL and MTNL decided to charge local rates for calls made to the Himalayan nation. Private player Idea Cellular has also announced that it would charge calls made to Nepal from its network equal as per local call rates up to morning hours of April 28.

Uber and Paytm are making financial donation towards relief efforts designed to help those impacted by the earthquake.