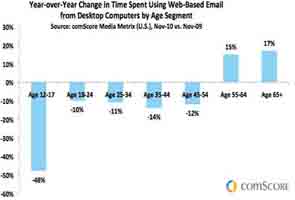 Highlights
In an article in Tuesday's Times, I wrote about the changing status of e-mail. Once it was cool to merely have an e-mail account (or several), but many young people now think of it as old school, and much prefer the zip of texting, instant messaging and social networks. (Read: E-mail gets an instant makeover)

Indeed, a deeper look at the statistics shows just how much personal e-mail use divides along generational lines.

In the last year, time spent using e-mail sites like Yahoo and Hotmail has fallen 48 percent among 12- to 17-year-olds, according to comScore, a market research firm. The statistics only include time spent with e-mail on computers, so the decline may be somewhat offset by teenagers using e-mail on their phones.

Still, the drop for that age group is far sharper than for others. ComScore found a decline of 10 percent in time spent on Web-based email among 18- to 24-year-olds, about the same as it found for people up to the age of 54.

"This strongly suggests a generational shift in the way people communicate," said Andrew Lipsman, an analyst with comScore. He said the fact that people over 54 are spending more time with e-mail likely reflects the fact that some in that age group are either getting online for the first time or becoming more familiar with computers and the Internet. For them, Mr. Lipsman said, e-mail is often a starting point.

"It's usually one step at a time," he said, noting that this group is not likely to jump from the postal service to texting: "You don't go from the most formal to the least formal in one step."

Mr. Lipsman, supporting ideas expressed by others in the story, said the shift isn't just generational but situational. As people get into the workplace, he said, they tend to use e-mail more often. Besides, he said, those in the workplace -- unlike younger people -- may find the constant ping of incoming texts and IMs to be more annoying than stimulating.

"Teenagers may have more time and fewer responsibilities, so that instant communication doesn't represent a disruption to people in most cases," he said. Besides, "digital natives are used to that always-on, constant communication."
Comments