A decade after its founding as a file-sharing business, Dropbox Inc is trying to become a new kind of company.

On Monday, the highly valued digital storage firm unveiled two new products - file sync and content collaboration tools - as part of a years-long effort to build up its business offerings.

"We fundamentally redesigned Dropbox from the ground up," Houston said.

Dropbox started as a free service for consumers to share and store photos, music and other large files. But that business became a commodity as technology giants Alphabet Inc's Google, Microsoft and Amazon.com began offering storage for free.

In its strategy switch, however, Dropbox continues to face stiff competition in an already crowded market, and must fight for hotly contested business accounts even as it tries to keep a foothold in the consumer market.

"Dropbox is clearly moving in this direction but still has some catch-up to do," said Forrester analyst Cheryl McKinnon.

At an event in San Francisco on Monday, Dropbox unveiled Smart Sync, a feature that allows users to see and access all of their files, whether stored in the cloud or on a local hard drive, from their desktop. Smart Sync is part of Dropbox Business, which requires companies to pay a fee based on the number of employees who use it. 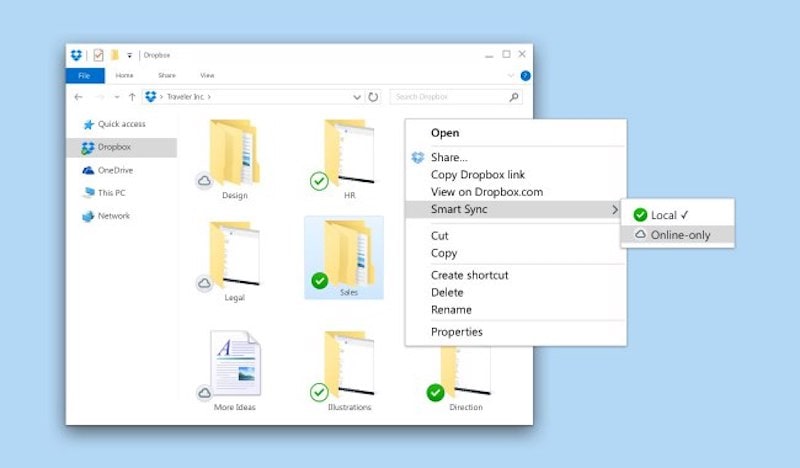 Dropbox also rolled out Dropbox Paper - which allows groups to create, edit and collaborate on projects in a single workspace - to users globally and in 21 languages.

"Where we see the most important problems to solve are certainly around workplace productivity and collaboration," Rob Baesman, Dropbox senior product management director, said in an interview. "A lot of investments we make are to solve those challenges."

The company also announced an array of new features and upgrades all aimed at better employee collaboration and efficiency.

Dropbox says about 200,000 of its 500 million users are businesses that are paying customers, about double the number two years ago. Many of Dropbox's users pay nothing.

It remains to be seen whether Dropbox can serve both businesses and consumers well enough to justify its $10 billion valuation, based on the price tag it earned in its last round of private financing.

"They thought 'I'll be Google Docs ... and at the same time I'll be Box,'" said Anshu Sharma, a startup founder and former venture capitalist and Salesforce.com Inc executive. "I don't think it's feasible even for a company even the size of Google and Microsoft to do that."

Aaron Levie, CEO of Box, said it was "both massively important and massively hard" to make deals with large corporations and government agencies that provide substantial recurring revenue.

"It only happens if you decide to fully focus on it," Levie said.

"This is the fastest growing SaaS (software-as-a-service) company we have ever worked with," Schreier said.

Dropbox has raised more than $600 million from venture capitalists and private investors, and some IPO advisers say the company's public market debut could come as soon as this year.

Public cloud computing companies are trading at 4.9 times revenue, on average, according to data from Bessemer Venture Partners. According to that standard, Dropbox would have to reach roughly $2 billion a year in sales to justify its current valuation.