Prime Minister Narendra Modi on Sunday said he dreamt of making India a $20 trillion (roughly Rs. 13,23,27,000 crores) economy and that he was pleasantly surprised by the change of perception about his country in a short period of time.

Attending a Q&A townhall session with Facebook CEO Mark Zuckerberg at the social network's headquarters in Menlo Park, the Indian Prime Minister also said a lot had to be done to bridge the digital divide in India.

"We are an $8 trillion economy today. My dream is for India to become a $20 trillioneconomy," PM Modi said, adding: "Amazing, how perception about India has changed in a very short time. We have brought in a new level of confidence."

Zuckerberg said India was personally very important to the history of Facebook.

"Early on, before things were going well, we saw Steve Jobs," the Facebook CEO said, referring to the legendary chief executive of Apple, now deceased, who had advised Zuckerberg to go to India to a particular temple to look for answers, like he himself had done during troubled times at Apple.

Modi also sought to tell Zuckerberg that India has other things to offer as well. "When you came to India, you went to a temple. And look where you have reached today," he said.

The Facebook chief had announced the Indian Prime Minister's visit on his page earlier this month and invited users to post questions. Tens of thousands of comments were made in reply, with questions on internet expansion in India, unemployment and also Modi's human rights record.

"We've received more than 40,000 questions for this townhall," Zuckerberg said.

Typical to the US, a townhall meeting refers to an informal public event, open to all, where those who attend ask questions from invited guests, generally public figures or functionaries, and also give ideas and seek their grievances to be redressed.

Modi said that in the last one to one-and-half years, "the perception of India has changed a lot".

"If you look at tourism for example, India has tremendous potential. Technology has really helped the industry and has brought the world together," Modi said.

Prompted by Zuckerberg to talk about his experience of being an early adopter of Internet in India, Modi said: "I did not have the privilege to become a very educated person growing up. My world could revolve around a few words. But social media has filled the gap for me," he said.

"You are associated with the service sector, and I have seen the power of it," Modi said.

Before the townhall began, Modi and Zuckerberg had a one-on-one meeting.

Patriotic songs like Des Rangila Rangila and Dhoom Machale from Bollywood films played in the hall.

The insights wall at the Facebook headquarters flashed about its 'India Connection'.

Earlier as Modi, dressed in a white shirt and black pants and a black Nehru jacket arrived for the townhall, he was greeted by Zuckerberg and his wife Priscilla Chan.

In the background, the music of Chak De India played to welcome Modi and the gathered crowd chanted "Modi, Modi".

At the usually very casual Facebook headquarters, Zuckerberg came dressed in a black suit and purple tie. There were many others also dressed in suits and ties.

Ahead of his interaction with PM Modi, Zuckerberg changed his profile picture to support Digital India. 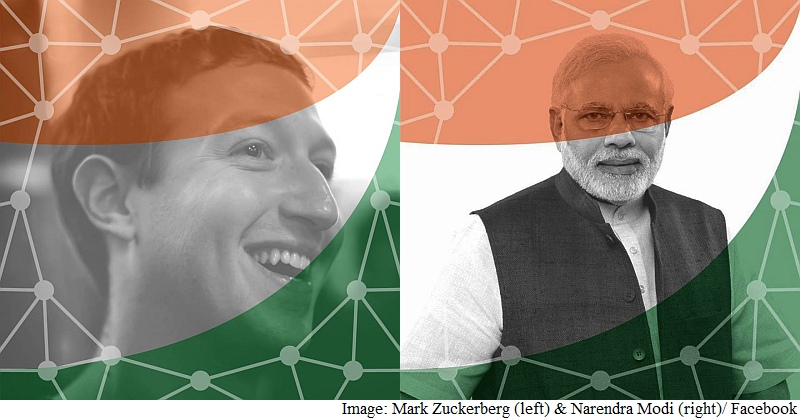 "I changed my profile picture to support Digital India, the Indian government's effort to connect rural communities to the internet and give people access to more services online. Looking forward to discussing this with Prime Minister Narendra Modi at Facebook today," posted Zuckerberg on Facebook.

Within minutes, PM Modi also changed his profile picture to thank him.