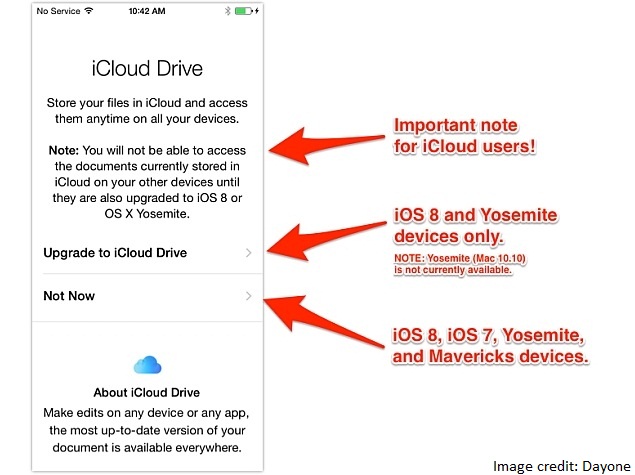 As iOS 8 makes its way to Apple devices, third-party app developers have urged Mac users not to upgrade to Apple's new iCloud Drive on iOS 8 devices, as they will experience iCloud sync issues with iOS 7 devices and Mac machines running OS X 10.9 Mavericks.

At present, Apple's iCloud Drive is only compatible with iOS 8 and OS X 10.10 Yosemite - which will reportedly release on October 21. During the upgrade users will also see Apple's note (see above), saying, "You will not be able to access the documents currently stored in iCloud on your other devices until they are also upgraded to iOS 8 or OS X Yosemite."

Notably, the iCloud Drive upgrade is optional and users can choose the 'Not Now' option to stick to older version of iCloud and it will continue to sync things normally across all Apple devices.

Users who have already upgraded their devices to iOS 8 and iCloud Drive can use Dropbox for syncing content. Though Dropbox on Tuesday had notified its iOS app users that it has discovered compatibility issues with iOS 8 and is temporarily suspending the automatic backup of photos and videos for users who have upgraded to iOS 8, it later resolved the issue on Wednesday.

Apple had announced its iCloud Drive at WWDC 2014 event in June. Earlier this month, along with iPhone 6 and iPhone 6 Plus unveiling, Apple also announced new pricing plans for iCloud storage. The company will now charge only $0.99 per month for 20GB of storage space, and the tiers scale to 200GB, 500GB and 1TB of storage space costing $3.99, $9.99 and $19.99 per month respectively. Apple will still provide 5GB of iCloud storage space to all users at no charge.
Comments