BookMyChotu.com Will Send Helpers to Stand in ATM Queues for You 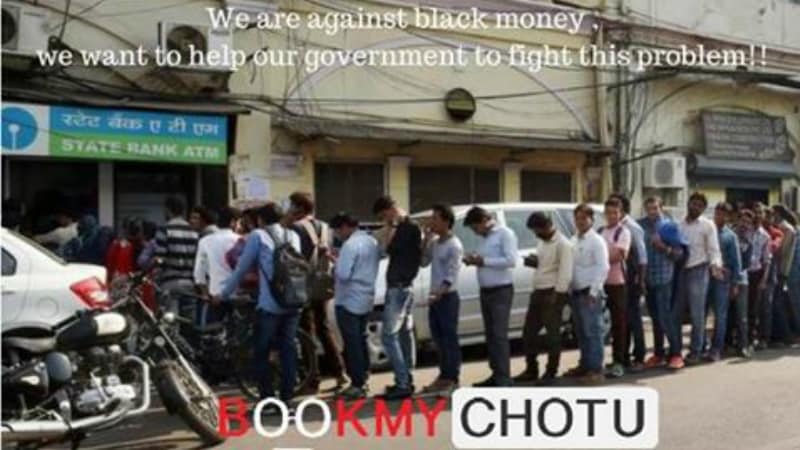 Indian startup Bookmychotu.com has expanded its service portfolio and now provides its customers with a 'helper' to stand in long ATM queues for them. This 'helper' will stand in the queues for Rs. 90 per hour on behalf of the customer. This service has caught the attention of many users since long ATM queues are an everyday affair, thanks to the cash crunch caused by the demonetisation of Rs. 500 and Rs. 1,000 currency notes earlier this month.

The Bookmychotu.com service is currently only available in UP, Haryana, and Delhi. To book a 'helper', the user needs to register online or call on +91-8587028869. Once the user receives confirmation, they can easily direct the helper to stand in the ATM queue for them. Debunking name rumours, the startup informs that there are no children employed by the company, and all 'chotus' are above 18 years of age.

Apart from standing in queues, a 'chotu' can be hired for various domestic chores like shifting, cleaning, grocery shopping, market help, house party help, help in a religious get-together, and more. The company further notes that the helper will not enter the bank, and will just stand in the queue for the customer.

Because of demonetisation, the government has capped bank withdrawal limits and this among other reasons has caused ATMs to go out of cash very quickly. Most ATMs refill money at least twice a day, and really long queues form outside as soon as the money is reloaded. Sometimes it takes hours before a user gets to withdraw from the ATM, consuming a lot of time. Bookmychotu has tried to cash in on this recent pain point by offering helpers to wait in these long queues.

Bookmychotu is a startup co-founded by Satjeet Singh Bedi and Govin Kandhari, and currently offers services through its online portal only. The company has announced that an Android app will be launched soon. Also, it's worth noting that there is no clarity on how these 'chotus' are hired, and trusting them with your valued items is advised at users' own discretion.

Seeking to allay possible concern over the name "chotu", which means "little one" in Hindi, Bookmychotu's site has this to say, "Please Note: "Chotu" is just a name and the same is being used for branding purposes. We have no intentions to hurt anyone's sentiments. All Chotus/Helpers are above the age of 18 and they have no objection with this name."