‘Dear Class of 2020’ virtual event will have musical performances from Lady Gaga, Alicia Keys, and others. 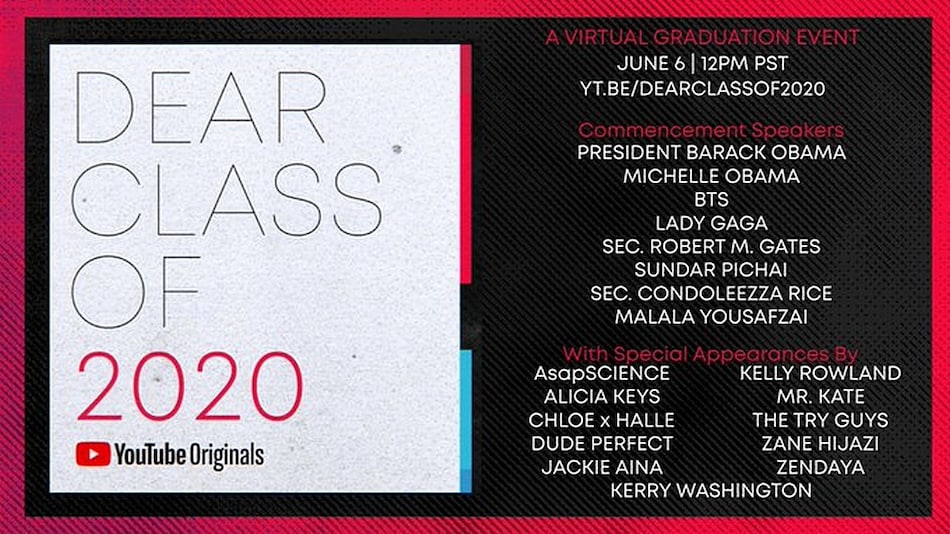 ‘Dear Class of 2020’ will be like a festival for students

‘Dear Class of 2020' is YouTube's graduation ceremony event that will be held on June 6. Students will not be able to attend graduation ceremonies in the current coronavirus pandemic, and so, a virtual graduation has been organised considering the safe social distancing norms. The announcement was made on YouTube's Twitter account where some details about the event were shared. ‘Dear Class of 2020' is a virtual graduation event hosted by YouTube to celebrate all the students graduating this year. The ceremony will be headlined by former President of the United States Barak Obama and former First Lady Michelle Obama. As the coronavirus lockdown has confined everyone in their homes, this is Google's way of celebrating the achievement of students.

As stated in the tweet, the Graduate #WithMe livestream event will start on June 6 at 12pm PST (12:30am IST) and have commencement speeches as well as musical performances. Speakers include Barak and Michelle Obama, Lady Gaga, Sec. Robert M. Gates, Sec. Condoleezza Rice, Malala Yousafzai, and the K-pop group BTS. The CEO of Alphabet and Google, Sundar Pichai, also shared news of his participation at the event through his Twitter account.

Musical performances from Lady Gaga, Alicia Keys, Kelly Rowland, and others will take place. YouTube also said there will be a “surprise special guest”. There will also be a number of special appearances including AsapSCIENCE, Dude Perfect, The Try Guys, Kerry Washington, and more.

‘Dear Class of 2020' will be streamed on YouTube Originals channel and the Learn@Home website. According to a report by Engadget, YouTube plans on sharing more details about the June 6 event on May 17. It is expected to give the schedule for the events planned for ‘Dear Class of 2020' livestream. It also states that the K-pop group BTS will host a virtual after-party.

Facebook is also holding an event on May 15, with celebrities such as Miley Cyrus, Jennifer Garner, Lil Nas X, and more, and this event will be hosted by Oprah Winfrey, according to a report.

Additionally, a one-hour Graduate Together primetime special will be aired on ABC, CBS, FOX, and NBC on May 16 at 8pm PT (8:30am IST) and as per a press release. The event will be livestreamed on TikTok, Facebook, Complex Networks, PEOPLE, YouTube, and more. According to the Graduate Together's Twitter account, Barak Obama and LeBron James will be among the key speakers at the event.

In these trying times, when people are forced to stay home to prevent the spread of coronavirus, the education systems has seen a major shift with classes being shifted online across the globe. This virtual graduation event is a way to continue the age old tradition of graduation ceremonies without breaking the social distancing regulations.