Retailers from Target to Amazon have been offering online deals since the beginning of November, and are promising "cyber" deals all week.

Some anticipated the extended period would hurt Cyber Monday sales. And the lackluster start to the holiday shopping season in brick-and-mortar stores also lowered expectations. But shoppers appeared to be eager to go online.

The weekend after Thanksgiving was popular for online shopping too, with sales up 26 percent compared to the same weekend last year. The two-day period raked in $2.01 billion (roughly Rs. 12,443 crores) in online sales, according to comScore.

"Any notion that Cyber Monday is declining in importance is really unfounded, as it continues to post new historical highs and reflects the ongoing strength of online this holiday season," comScore Chairman Emeritus Gian Fulgoni said.

This may be part of a larger shift toward online buying as mobile phones spur the practice known as "showrooming," Fulgoni said in a statement. The term describes the practice of a consumer going into stores to see an item but then buying it, or a similar product, online.

"The data we're seeing suggest it may be more a change in shopping behavior than a lack of consumer demand," Fulgoni said. 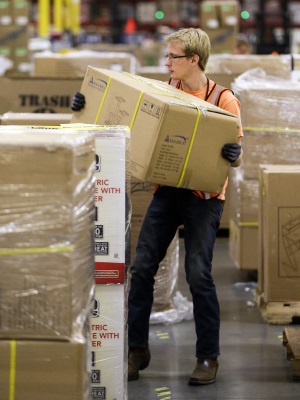 Other organizations measured a more muted response for the day: IBM Digital Analytics Benchmark reported that online sales rose 8.5 percent this year compared to last on Cyber Monday. That is less stellar growth than last year's, when IBM says online sales jumped more than 20 percent by its measure.

"As the holiday shopping season becomes less concentrated on a single day, retailers and marketers took advantage by making it easier for consumers to find the best deals on the go, whenever and wherever they chose to shop," said Jay Henderson, director of IBM Smarter Commerce.

Still Cyber Monday is the busiest U.S. online shopping day of the year - a title it has held since 2010.

The name Cyber Monday was coined in 2005 by the National Retail Federation's online arm, called Shop.org, to encourage people to shop online. The name was also a nod to online shopping being done at work where faster connections made it easier to browse.

Some retailers painted a rosy picture of the day. Walmart said it received the most online orders in its history on Cyber Monday. It added that mobile made up about 70 percent of the traffic to its website between Thanksgiving and Cyber Monday.

But some shoppers were disappointed by the deals. Preston Neill, 28, from Philadelphia, took advantage of early online deals over the weekend like 40 percent off board games from Amazon and clothing that was 40 percent off from Banana Republic. But he said the deals on Cyber Monday seemed similar to what he had already seen earlier.

"I haven't seen anything that jumps out at me," he said. "I feel like (Cyber Monday) is the Super Bowl of shopping, there is a lot of hype, then it doesn't quite live up."