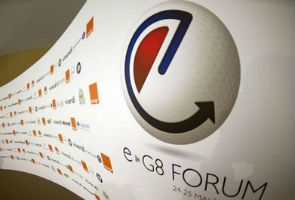 Since Tuesday "we have been undergoing a series of attacks and attempted attacks from people outside" the wireless service providing Internet access to journalists and delegates, an e-G8 official who asked not to be named told AFP.

The cyber-attacks failed to cut off access but caused "disruption" of the wifi connection and the forum's video streaming in the tent where politicians and the world's top media bosses were meeting, the official added.

Sarkozy organised the e-G8 to draw up proposals to put to the G8 summit of leading powers, opening on Thursday. Media rights and civil society groups complained that their voices were not being heard at the e-G8.

Web freedom campaign group La Quadrature du Net rejected rumours that it was behind the cyber-attacks.

"That shows that some people are ill at ease with our presence at the e-G8," Jeremie Zimmermann, leader of that campaign group, which has fiercely criticised the stance of major delegates on online regulation, told AFP.