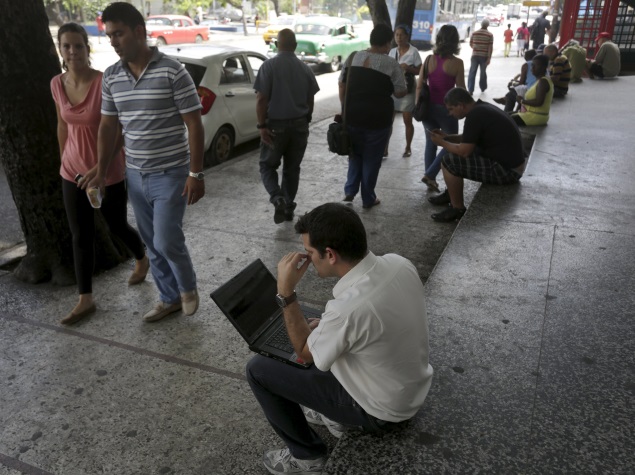 Cuba has opened 35 Wi-Fi access points nationwide, offering unprecedented online access in a country that until now has restricted use of the Internet to an elite few.

Before the Wi-Fi signals became available on Wednesday, broadband Internet access had been limited to largely to desktops at state Internet parlours and pricey hotels.

"It was high time for Cuba to be able to connect. Everyone has the right to Internet," said Alejandro Costa, who used the Wi-Fi on Thursday. The service was available to those who had previously established an account with state telecoms monopoly Etecsa.

Whether because of a lack of investment or concerns about the flow of information in a Communist state that monopolizes the media, Cuba has lagged behind in Internet usage. Only 3.4 percent of Cuban homes have either intranet or Internet access, according to a U.N. agency.

At a Havana street known as La Rampa, Cubans brought out smartphones new and old, whether purchased in state stores, on the black market, or received as gifts from friends and relatives abroad. They mainly browsed Facebook.

An Etecsa official who declined to be identified said all 35 access points started working on Monday, though service at La Rampa was delayed several hours.

"Historically, Cuba has had probably the worst Internet access in the hemisphere. Clearly, the Cuban government has decided that broad Internet access is essential to a 21st century economy. The Internet cafes and now this Wi-Fi network show that the government is serious about expanding Internet access," said William LeoGrande, a professor of government at American University.

The Cuban government also slashed prices from $4.50 to $2 an hour, still exorbitant for Cubans, who typically earn a monthly salary of about $20.

Many Cubans suspect the new development is related to the recent warming of U.S.-Cuba relations. The two former Cold War rivals on Wednesday agreed to reopen embassies and restore diplomatic relations as of July 20. In January, U.S. President Barack Obama relaxed the U.S. economic embargo for telecommunications, hoping to promote the Internet in Cuba.

For Fidel Croswell, a 50-year-old taxi driver from Havana, the new Wi-Fi network means no longer standing in lines at state Internet parlours.

"But the ultimate solution would really be home Wi-Fi, where you can connect while sitting around shirtless in your flip-flops," he said.