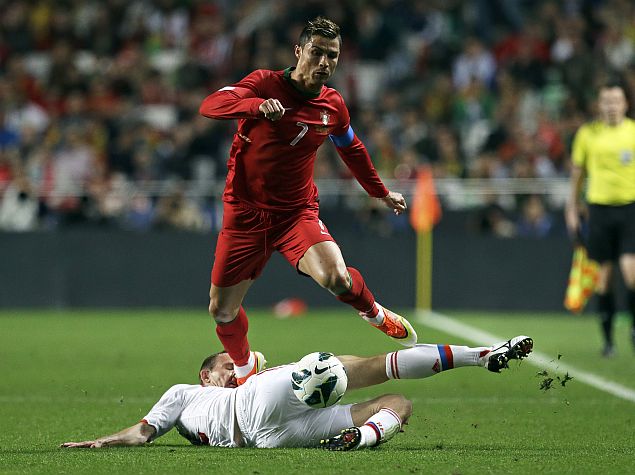 The fans can't wait to catch a glimpse of him in the upcoming soccer World Cup and well aware of the interest in Cristiano Ronaldo, cybercriminals are most likely to use the Portuguese star's name to lure visitors to web pages designed to infect them with malware.

The McAfee 'Red Card Club' showcases the top 11 Brazil-bound players whose webpages are considered to be risky for fans to search for online. Following Ronaldo are Argentina's Lionel Messi, Spain's Iker Cassillas, Brazil's Neymar and Algeria's Karim Ziani in the list prepared by the leading virus protection and Internet security site.

As is common with other cultural sensations, cybercriminals leverage consumer interest in the world's most popular sport to lure them to websites rigged with malware, malicious code capable of infecting a user's machine and stealing passwords and personal information.

McAfee researchers have used McAfee SiteAdvisor site ratings to determine which sites are risky to search when coupled with footballer names and have calculated an overall risk percentage.

According to the research, fans run the greatest risk when visiting sites offering screensaver downloads and videos showcasing the extraordinary skills of the players.

Searching for the latest Cristiano Ronaldo content yields more than a 3.7 percent chance of landing on a website that has tested positive for online threats, such as spyware, adware, spam, phishing, viruses and other malware.

Players make the McAfee "Red Card Club" by scoring among the top eleven positions in terms of greatest percent chance of webpage risk.

"Cybercriminals can't resist taking advantage of 'fever-pitch' excitement around this summer's epic matchups in Brazil. The danger is that this anticipation could lead fans to download content from pages they shouldn't to fulfil their football experience."

Tata Photon Max Wi-Fi Gets Upgraded Download Speed of up to 9.8Mbps
EA to Unveil Mirror's Edge 2, Battlefield: Hardline and More at E3 2014