Another day, and another hack. This time, the latest victim appears to be online travel company Cleartrip. Its website was hacked briefly on Monday, and a group called Turtle Squad took the responsibility for the hack - which saw the website defaced.

Update: Cleartrip on Tuesday acknowledged the hack on Twitter, and added that "no customer data and [sic] payment details were compromised." It clarified that passwords are not stored as plain text on its servers, and that only the home page was affected - going doing for 3 minutes.

The screenshot featured the message "Roses are read, violets are blue, all your security is up to you. We Are Turtle Squad Got It?". The hackers also took a dig at the website's security, by writing, "Hey! Are you one of those 1.4 crores users? They say you're secure." 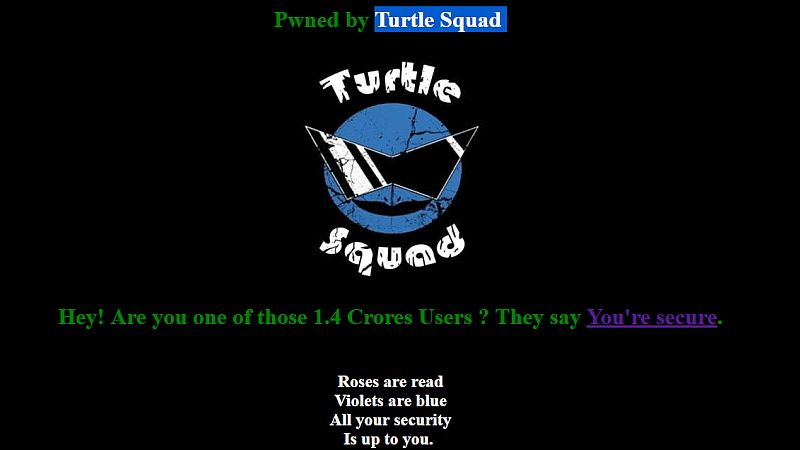 Upon checking the Cleartrip website, we could not see any defacement. However, the Wayback Machine Internet Archive shows a multitude of edits to the website between 10:08 and 10:42am on Monday, while a Google Cache page of the website from 10:03am shows the defaced page. Another clue was a Google search for the words "Turtle Squad" + Cleartrip, which features Turtle Squad's text in the page description.

Gadgets 360 has written to Cleartrip for a statement on the hacking incident and we will update the story in case we receive a response from the company. If the hacking group's claims are to be believed, then details of 1.4 crore users may have been compromised - though, the hackers may only have been referring to how easy it was to deface the Cleartrip website.

Cleartrip started off its operations in 2006 as an online travel company offering information for easy booking of hotels, flights, trains, and more. Apart from India, Cleartrip is now also available in Oman, Qatar, Kuwait, Bahrain and Saudi Arabia.

As for Turtle Squad, not much is known about the hacking group. While the name does appear to be homage to the Lizard Squad, its logo takes inspiration from Pokemon's Squirtle Squad leader.