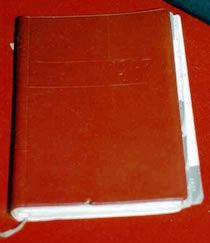 A copy of the handwritten diary that Che Guevara, the Argentine-born Cuban revolution hero, kept before his death in the mountains of Bolivia is now available online, a researcher said Monday.

"The goal is for a historical document to be within everyone's reach. And the Internet makes it possible for everyone to know what happened 45 years ago," said Bolivian researcher Carlos Soria Galvarro.

The diary, posted on Soria Galvarro's website, was penned in blue ink from January to October 1967, a period when Guevara was on an ill-fated campaign to ignite a peasant revolution in Bolivia.

Guevara's diary was turned over to Cuba, which published it in 1968.

But the published texts contained changes from the original manuscript, sometimes to clean up Che's rawer language.

"Now everyone can see a virtual image of what he wrote in his handwriting," Soria Galvarro explained.

Soria Galvarro has written five books about Guevara and his time in Bolivia.