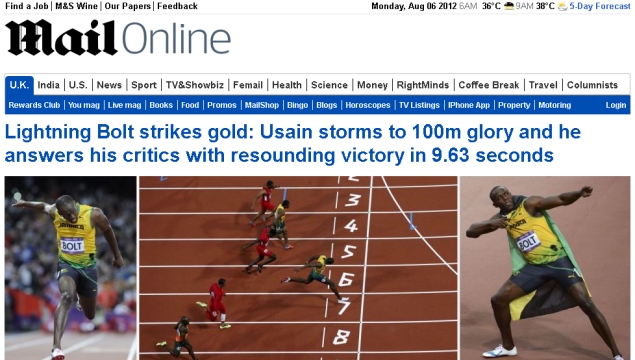 The British are coming, not by land or by sea, but on the Internet.

British media have been making inroads in the US market by invading online space, seizing readers who might otherwise visit websites of domestic outlets like Fox News or The New York Times .

And, even though US news organizations are widely respected around the world, the Brits are peeling away American readers.

According to data from research firm comScore, the tabloid Daily Mail's Mail Online overtook The New York Times last year as the world's biggest newspaper website and held the top spot in June with 44.7 million visitors.

Separate data from Web analytics site Alexa.com showed that The Guardian and BBC websites among the top 15 news sites, holding their own among CNN, Yahoo! News and others.

"In the English-speaking world, the divider of the Atlantic Ocean is ebbing away because of the Internet," said Ken Doctor, a media analyst with the research firm Outsell.

The transatlantic gap had made it difficult for print editions to make it to US shores.

But British media groups are eager to expand on digital platforms just as US media such as The Wall Street Journal and New York Times are growing their international audiences.

In June, the Financial Times launched a multimillion dollar marketing drive in the US, saying it was "underscoring its position as the authoritative source on US and global business, economic and political news."

"It also represents a substantial investment in the US, one of our fastest growing markets," she added.

The FT did not provide a breakdown of its subscribers by region but one survey showed the newspaper and FT.com reach 761,000 US readers. The company said it has 300,000 digital paid subscribers worldwide.

The London-based paper said mobile users account for 25 percent of traffic to FT.com and 15 percent of new subscriptions.

"If you talk to the major British quality publishers, about a third of their traffic has been over the years in the US, which is a surprise," Doctor said.

The analyst said gains came in the past decade, with some theorizing that the United States' previous president and his policies had been so unpopular and so little questioned by domestic media that readers looked abroad.

"George W. Bush was so unpopular and the New York Times aided the development of the Iraq war, and people wanted media they thought they could trust," Doctor said.

But he said these gains have been extended even after Barack Obama took over the White House.

One factor is how Internet news searches work.

"Google has democratized the sourcing of news, so you are as likely to find a story from the BBC as from Chicago Tribune," Doctor said.

"There is an audience of people who want another point of view, there is an expat audience, and you put all those together and it's significant."

Rebecca Lieb, analyst with the Altimeter Group, said paywalls on some US sites like the New York Times have driven readers elsewhere, and social media also can help drive momentum for sites from the British.

"Tweets and social mentions are becoming a significant driver of traffic to news sites," Lieb said.

"Digital media has always been available across the pond but there is a component of cross-promoting now that enables them to be found."

The Guardian, which has heavy financial pressures threatening the home print edition, has been nonetheless expanding its US presence. Last September, the London daily launched a new US homepage aimed at the American audience.

The Guardian said in a statement it had opened the US office "largely because one-third of our audience is in the US so we wanted to offer more content relevant to their daily lives."

"Our continuing growth and increased reach in the US is a testament to the US appetite for Guardian's internationalist, online journalism

"We're currently at over 20 million unique viewers a month which is up approximately 80 percent from last year."

The Daily Mail meanwhile has managed to get a profit out of its Mail Online Web operations for the first time, according to the British-based Media Week, citing sources at the company.

The industry publication said Mail Online would show a profit of £30 million ($46 million), amid 80 percent revenue growth, and its use of a team of fewer than 30 people in Britain, 20 in New York, and 10 in Los Angeles.

Mail editor Paul Dacre told The New Yorker earlier this year that the site has been successful in the US market by delivering what readers want.

"Unlike mainstream media sites in the US, where, quite frankly, readers' interests are not very high on the agenda, we are driven by what readers want to read," Dacre said.

"At its best, American journalism is unbeatable. But the problem with many of your newspapers is that they became too high-minded, too complacent, and self-regarding.

"They forgot that there's a huge market out there of people who are serious-minded but also want some fun in their reading."

While British websites can attract US readers, making a profit is another story.

"It's very hard to make money on media," Lieb said.

But she noted that if sites can expand their footprint with minimal costs, any additional revenue would be "gravy."

Doctor said that to get themselves back in the black, news organizations need to invest in sales staff for local advertising.

"It's hard for the British media to sell advertising in the US just as it is hard for the New York Times and Wall Street Journal in Europe," he said.

"The greatest investment is in on the ground sales people. They have to put in place a sales forces and agencies which know the territory."